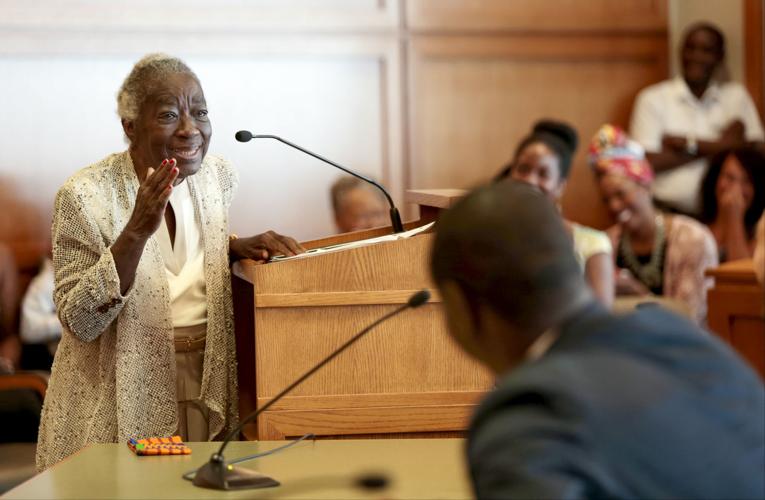 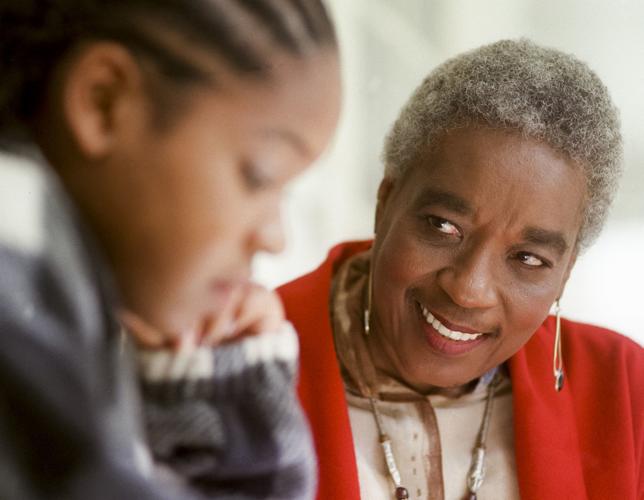 Milele Chikasa Anana listens in as one her ten grandchildren, Myriah Lattimer, reads aloud from an issue of UMOJA. 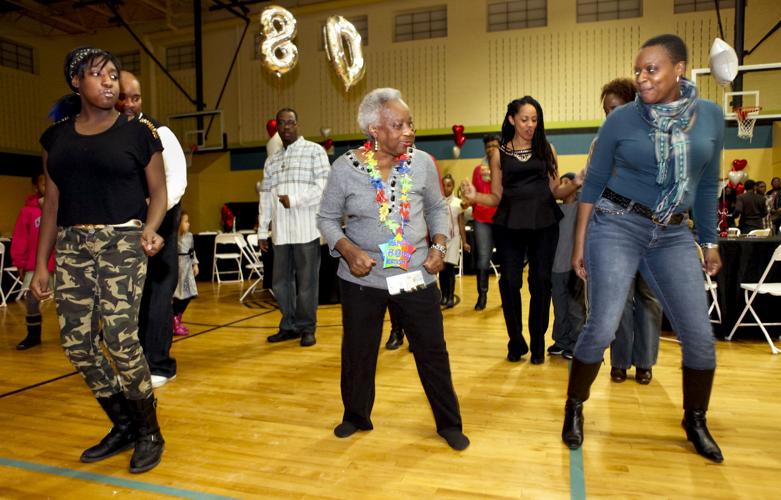 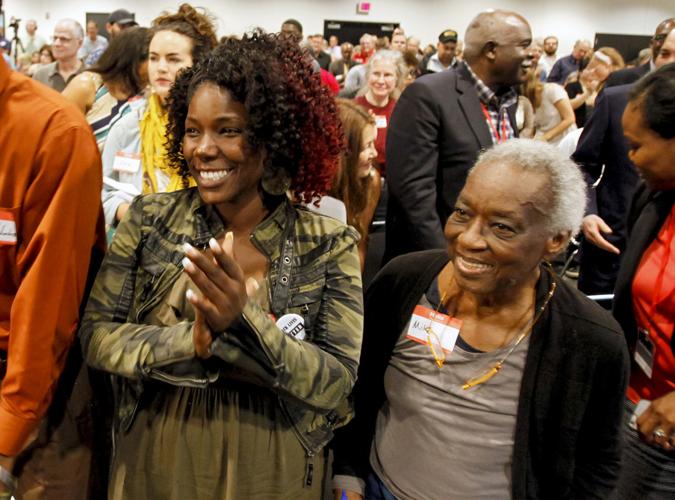 Brandi Grayson, (left) with the Young, Gifted and Black Coalition, and Milele Chikasa Anana, publisher of UMOJA Magazine, applaud and smile as Rev. Alex Gee is introduced during during the Justified Anger: Let's Talk About It event at the Alliant Energy Center, in Madison, on Friday, May 29, 2015. photo by Michelle Stocker 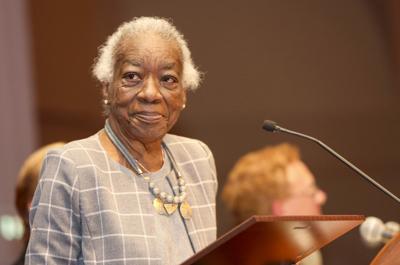 Milele Chikasa Anana, a Madison community leader and publisher, died Wednesday morning at the age of 86 after choosing to stop dialysis.

For nearly three decades, she served as editor and publisher of UMOJA Magazine, which launched in 1990 to celebrate the accomplishments and joys of African Americans in Madison. Known to many as “Ms. Milele” or "Mother Milele," she is remembered as a “champion of positive black news” and a “fierce lover of black people.”

“I have been a publisher, an editor, a social worker, an activist and general hell-raiser,” Anana said with a smile in a 2019 interview on PBS Wisconsin’s Wisconsin Life.

“I didn't know the city was not ready to offer equal opportunity to black people for jobs,” Anana said in a three-part interview conducted by the UW-Madison Oral History Program. “It was a terrible, terrible resistance,” she said, citing pushback from both City Hall and the companies and unions that worked for the city.

“She was sympathetic and relentless at the same time,” said Rev. Alex Gee, lead pastor of Fountain of Life Covenant Church and founder of the Nehemiah Center for Urban Leadership Development, who pointed out she wasn’t afraid to step to the microphone to address mayors, governors or presidents. “I think she knew that she earned the right to speak truth to power, and power to those who felt disenfranchised.

Soglin called Anana’s contribution to the city and the county “overwhelming,” crediting her with increasing diversity recruitment in the schools, opening employment opportunities for women and people of color, and obtaining public and private contracts for minority and women-owned businesses.

“Like so many in Madison, I was fortunate to benefit from her insight, vigorous commitment, and advice for over 45 years,” Soglin said.

Anana also served as interim director of the Madison Equal Opportunities Commission. She worked with the Black Chamber of Commerce to develop a directory of black-owned businesses and to start Black Restaurant Week. She was also an active member of the Madison Alumnae chapter of Delta Sigma Theta Sorority.

She received numerous honors from local social justice and civic organizations. In 2009, she was awarded the city of Madison's Reverend Dr. Martin Luther King Jr. Humanitarian Award, but she missed the celebration to attend Barack Obama’s inauguration. In 2018, Rotary Club of Madison honored her with the Rabbi Manfred Swarsensky Humanitarian Service Award and she gave the accompanying $2,500 grant to the Goodman Community Center to seed a scholarship fund to send a local student to a historically black college or university.

“She has devoted her life to building her community and mentoring young people towards realizing their potential,” said Goodman Community Center Executive Director Becky Steinhoff.

She wasn’t always “Ms. Milele.” Known previously as Betty Latimer, she announced her new name on her 60th birthday. Later, Fabu Phillis Carter, a Mississippi-born poet who would go on to become the city’s poet laureate, started calling her “Ms. Milele,'' and the moniker stuck.

Anana grew up in Tulsa, Oklahoma, in the segregated South and later moved to the Roxbury neighborhood of Boston, where she worked with the NAACP and demonstrated for alternative schools for black children barred from public schools.

When she moved to Madison in 1968 with her then-husband Jim Latimer, a professor at the School of Music at the University of Wisconsin-Madison, they were among the only black residents in their near west side neighborhood. “I cried for days, didn’t unpack,” she told the Cap Times in 2009.

Helen Vukelich, a white neighbor who had organized for fair housing in Madison, connected Anana with other civil rights activists, and the two remained close friends until Vukelich’s death in 2015.

“She would always challenge you to be your best,” recalled Vukelich’s daughter, Martha Vukelich-Austin, who grew up alongside Anana’s children. “She wasn't sitting around waiting for things to happen. She would make things happen, and she would expect you to make things happen, too.”

Not long after the Latimers moved to the neighborhood, a middle schooler burned a cross on the family’s lawn.

“It was a very disturbing incident,” Vukelich-Austin said, “but when they found out it was a kid, they really turned it into an educational moment in the community,” with Anana and friends arranging for guest speakers to discuss the incident at school.

Frustrated that African Americans only made the news if they were athletes or alleged criminals, Anana admired UMOJA, the local newsletter Carolyn Ewing had launched in 1990 to highlight accomplishments, anniversaries, birthdays and graduations.

When Ewing left a few years later, Anana took over as editor and publisher. Eager to expand UMOJA from its two mimeographed sheets, she took every class she could on magazine production through UW-Extension and transformed the newsletter into a magazine.

Anana did everything from writing and taking photographs to fundraising at the magazine — named for the Swahili word for “unity” — which for three decades has featured positive news and exquisite covers, each a work by a local black artist.

“She didn’t think that the ‘society’ page … should be reserved for those who are considered affluent,” said Gee.

UMOJA played a different role than a magazine like Essence, Gee said. “We weren't reading about the famous black people in Chicago or L.A. or New York. We're reading about each other.

Gail Ford, director of UW-Madison’s PEOPLE program, which prepares underrepresented students to enroll in and succeed in college, knew UMOJA well. Each May, the magazine would feature the success stories of the program’s graduates. Ford saw it as part of the publisher’s mission “to make sure black people were seen, described as, and appreciated for the positive impact they had on this community.”

To Anana, celebrating was essential.

“Milele wanted us to take a village to take pride in the village, because you can only heal the village if you loved it,” Gee said.

Mitchell hopes to display UMOJA covers at the courthouse.

“She always told me that she wanted the kids to see where they come from and who they really are,” Mitchell said.

Anana remained at UMOJA’s helm until retiring in November 2018. She sold the magazine to Urban League of Greater Madison and she chose veteran journalist Yvette Craig to take over as editor and publisher.

“She was the very heart and soul of Madison,” said Craig. “Whenever she entered a room she received the reverence deserving of royalty. Fortunately, I was able to sit at her feet and learn from her wisdom.”

Ruben Anthony, president and CEO of the Urban League of Greater Madison, said it’s an honor to take on the challenge of keeping the magazine alive. The Urban League board regularly mentions that an octogenarian managed the magazine on her own for years, as if that meant it was easy.

“We're not just talking about a normal person,” Anthony reminds them. “She was like a one-person army.”

In a 2019 interview with Madison Magazine, Anana said she believed her mission had benefited many Madison outlets, including Madison365, The Madison Times, Capital City Hues and the Cap Times.

“Ms. Milele was always blunt in telling me what she thought we were doing right and wrong in covering her community,” said Paul Fanlund, editor and publisher of the Cap Times. “She had a gift for delivering what I might call graceful criticism — pointed and effective yet not confrontational.”

Celebrating the positive and pushing to change the negative was Anana’s signature mix. While she wrote about good news, “she was very focused on highlighting the fact that there's some work to be done to close up,” said Anthony. “She had a commitment to making the community better for African American families, and then making this a better community for us all.”

Her own pastor, Rev. Marcus Allen of Mt. Zion Baptist Church, said her health was already declining when he moved to Madison in 2016. Her voice had grown weaker, but he knew the truth about the petite woman sitting in the back pews.

“This is a strong lady,” Allen said. “She is the picture of African Americans in the United States. We went through so much but we still are strong and holding on. I think she is the epitome of that.”

Just hours after her mother’s passing, Amani Latimer-Burris told the Cap Times that Anana had poured love into this community, and the community had done the same for her.

“She's built us all into who we are … Not just us – her daughters and her sons and her grandchildren – but the whole community.”

The work isn’t finished, but Anana's part is, Latimer-Burris said. “She's shown us the way: You come in, you do what you're supposed to do, and then you're done.”

She just hopes others will pick up where her mother left off.

Editor's note: This article has been corrected to reflect that Carolyn Ewing launched the UMOJA newsletter which became UMOJA Magazine. We regret the error.

A committee previously recommended the school be named for Milele Chikasa Anana among three initial proposals. The group will consider a fourth name next month, though it could recommend Anana again.

A committee previously recommended the school be named for Milele Chikasa Anana among three initial proposals. The group will consider a fourth name next month, though it could recommend Anana again.