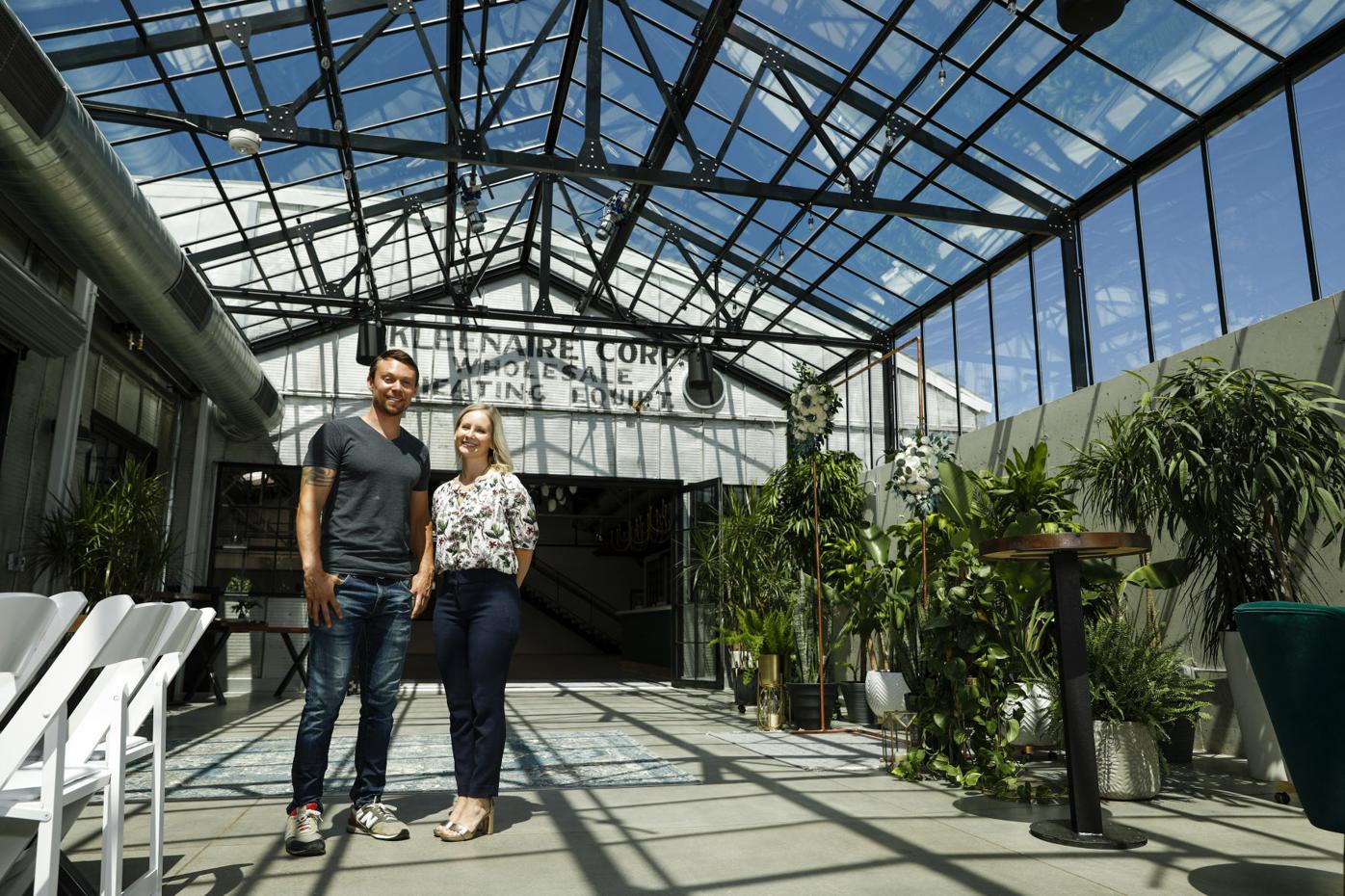 Owners of new wedding/event venue, The Tinsmith, Jessica Wartenwieler and Eric Welch, are pictured at their venue in July 2020. The venue opened in the COVID-19 pandemic and is now hosting micro weddings of 10 people or less. 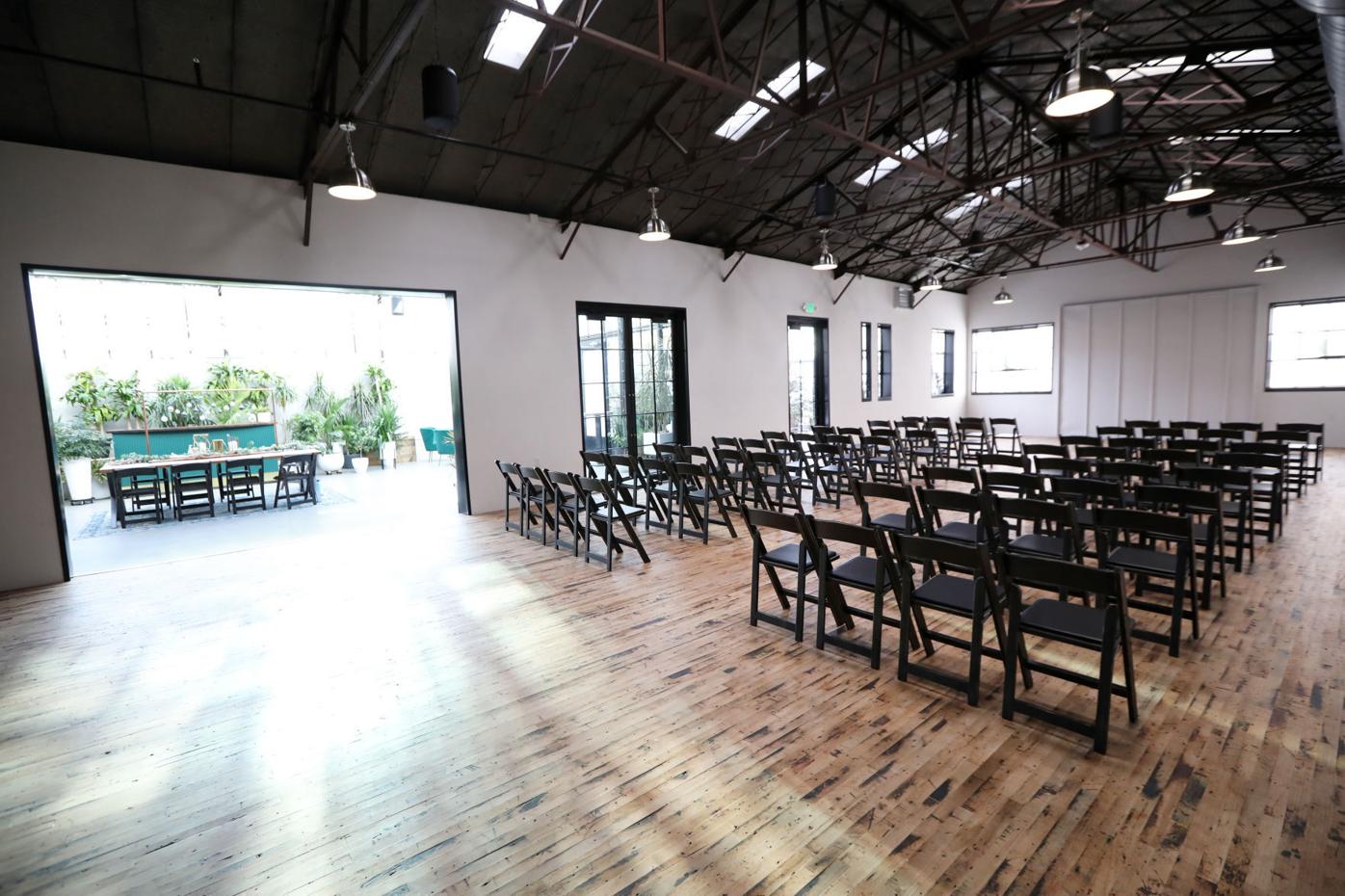 The Tinsmith, an event venue on East Main Street in Madison, opened during the pandemic. Due to local public health ordinances, the venue has never hosted a wedding with more than 10 people.

Results released Monday from a new regional business survey reveal the heavy toll the pandemic has taken on those who make a living by bringing people together, including venue and hotel operators, photographers, videographers, florists, event planners, entertainers, caterers and makeup artists.

The survey, conducted by the local chapter of the National Association for Catering and Events, gathered responses in November from 152 businesses that provide services or facilities for Dane County events.

In the months since Gov. Tony Evers’ stay-at-home order was struck down by the Wisconsin Supreme Court in May, Dane County ordinances have capped indoor gatherings at 10 people and outdoor gatherings at 25, but some surrounding counties have opted not to restrict gatherings at all.

About three-quarters of the businesses surveyed said they do business primarily within Dane County, while the remainder split the business between Dane and surrounding counties. Among those regularly doing business in other counties, 28% said they’d lost 75% or more of their expected revenue, while businesses primarily operating in Dane County saw a heavier toll: More than half said they lost 75% or more of their expected revenue.

That, said Sarah Davidson, a wedding planner and consultant, is evidence that county’s rules are responsible for some of the industry’s losses.

“A majority of the venues outside of our county still had really great 2020s,” Davidson said.

Unlike venues, vendors can relocate their services if an event moves to a surrounding county, Davidson said, but they may find themselves in unregulated environments that feel unsafe.

Noting that Dane County hasn’t increased its event caps since July, Davidson said her group would like to work with county leaders and public health officials to create more nuanced restrictions, perhaps modeled on the county’s regulations for restaurants, which can currently operate at 25% of their capacity.

Local public health officials confirm that people have traveled outside the county to circumvent public health orders, noting the agency’s contact tracers find out after a person tests positive for the virus.

“It’s concerning to us and makes our mission harder,” said Public Health Madison & Dane County Director Janel Heinrich in an email statement. “Ideally, we would have a statewide strategy that would make public health orders consistent across all counties. The virus does not respect county borders.”

Among those bearing the cost of the current restrictions are Jessica Wartenweiler and Eric Welch, who opened The Tinsmith, a 9,000 sq. ft. venue on Madison’s near east side this summer. It was a $2.2 million investment, Wartenweiler said, and was scheduled to host its first wedding in June.

But the 10-person cap “essentially shut down” the business, Wartenweiler said, as every wedding on their schedule was for at least 150 guests.

And, because the venue didn’t open until 2020, Wartenweiler and Welch weren’t eligible for most pandemic business relief funds. They received two local grants, but those covered less than a month’s worth of costs, which include the mortgage, taxes, utilities and insurance, she said.

“We still have our same holding costs every month on a vacant building.”

Looking to put the space to use, Wartenweiler and Welch began hosting “microweddings,” ceremonies capped at ten people, in its greenhouse. “It was a nice way to get people in the space, but, of course, a 10-person wedding does not pay our bills,” Wartenweiler said.

The venue has a 500-person capacity and a $200,000 HVAC system, but, under current rules, its events are subject to the same restrictions as a fraternity’s basement party, despite the fact that it’s easier to enforce regulations in businesses than in homes and businesses might be better able to adopt safety protocols, Wartenweiler said.

If allowed, she thinks she’d feel comfortable operating at 25% of capacity, a 125-person limit, with masks and social distancing. With those sorts of precautions, she said, “we do think that's a safer option than having events leave Dane County and move to unregulated environments.”

Shortly after Dane County public health officials issued their first coronavirus orders in May, the agency issued the Forward Dane plan, which outlined the virus benchmarks that would indicate that the county could safely move to the next stages of reopening.

But in September, PHMDC spokesperson Sarah Mattes told the Cap Times that “the original phases that we drafted in Forward Dane aren’t as clear-cut as we hoped they would be” and that the reopening “will most likely be (on) an order-by-order basis.”

While such an approach might work for restaurants, where owners can quickly scale up capacity, it doesn’t work well for an industry whose business is frequently planned a year or more in advance, Davidson said.

['There are some things that we want to leave behind': Madison rings in 2021]

She’d like to see metrics that would let her and her clients plan ahead. That way, if a couple wanted a 100-person wedding, for example, she could talk with them about the virus benchmarks the county would need to meet in order before that wedding could happen as planned.

Public health officials should modify and clarify the event rules soon, Davidson said, as couples who planned for 2021 weddings will soon be considering how to proceed. With so many weddings postponed from 2020 to 2021, she said, the stakes are especially high.

Already, local event businesses are seeing cancellations for 2021 events, Davidson said. Of the 152 survey respondents, 80% said they’d had events cancelled, postponed, moved to a private residence or moved out of the county.

“It's not businesses versus public health”

PHMDC did not respond to specific questions about whether the agency plans to modify its restrictions on gatherings, but Heinrich said in a statement that sectors like hospitality, sports and events “are unfortunately built on models that don’t allow for strict adherence to best practices to prevent the spread of disease.

“They are more likely to result in taking off masks to eat and drink, or requiring close contact and heavy breathing which are inherently more risky for both people that work in them, and their patrons,” Heinrich said. “Data has demonstrated time and again here in Dane County, across the state, and around the country an association between employment or patronage of these sectors and increased transmission of illness.”

From December 14 to 27, an average of 138 new virus cases were detected in the county each day, down from November's surge but about triple July's numbers. Compounding the risk, a more contagious strain of the coronavirus has been detected in at least four U.S. states and at least 33 countries, leading public health experts to call on Americans to be yet more vigilant in preventing the spread.

Heinrich acknowledged the economic toll the pandemic has exacted. “We are strongly in favor of financial aid from state and federal authorities to support our business community and other members of our community who have been adversely impacted.”

Davidson said she’s participated in several meetings with local leaders. “We always appreciate that they're willing to listen to us, but we wish more action could have been taken by now,” she said.

Both Davidson, who lives in Fitchburg, and Wartenweiler, who lives in Madison, said they think that the county can create policies that are better for their business without sacrificing the health of the community.

“It certainly weighs on my mind a lot: Do I feel safe going to these events?” Davidson said. “But then, at the same time, I really know what our industry is capable of, and if we were given the chance to demonstrate that, I really believe in what we could do.”

Wartenweiler hopes that business owners can work with public health officials to study exactly what kinds of gatherings spread the virus and create a more nuanced strategy based on those findings.

“It's not an either or. It's not businesses versus public health … I am a community member as well, so I want to do what's best for our community,” Wartenweiler said.

“This has been an immensely challenging time for everyone,” she said, including county leaders and public health officials, “but it's been 10 months now, and so I think we have to start thinking about the long-term economic effects of what's been happening.”