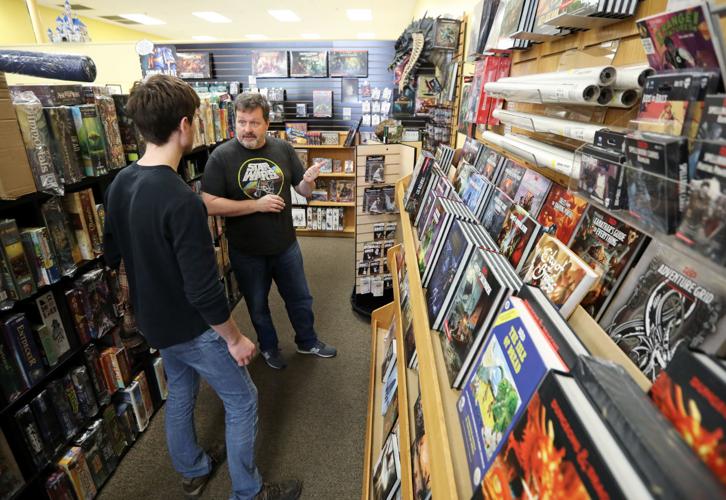 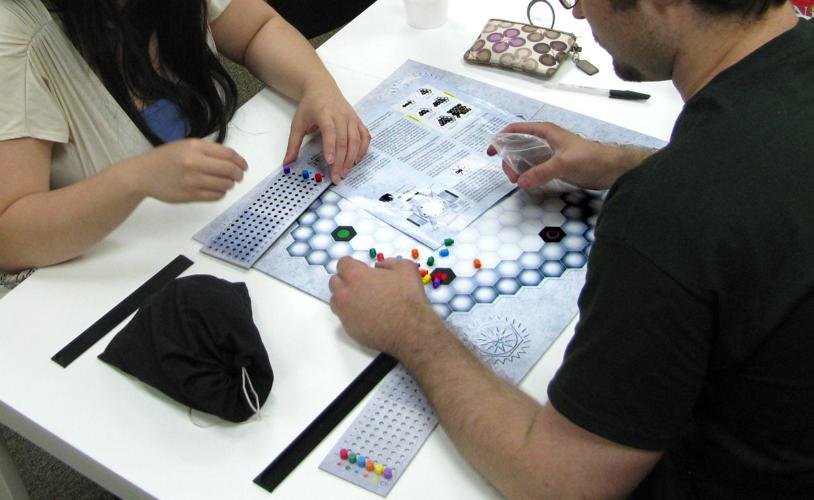 Bars and specialty games stores have become havens for playing hobby games, but the coronavirus has sparked a new interest in games as a quarantine-friendly activity. Above, a file photo shows two customers squaring off in a game at I’m Board in Middleton.

Bars and specialty games stores have become havens for playing hobby games, but the coronavirus has sparked a new interest in games as a quarantine-friendly activity. Above, a file photo shows two customers squaring off in a game at I’m Board in Middleton.

As people across Dane County hunker down to reduce the spread of the coronavirus, many local businesses are struggling.

One industry that’s booming? Board games.

Before the virus, Madison’s tabletop game scene was alive and well, with regular game nights around town and a nearly 800-person Madison Board Games and Beer Facebook group, which convenes enthusiasts to play at local bars and breweries. Glance around your favorite coffee shop or watering hole and just might find a stack of board games in the corner.

But as experts recommend “social distancing” (or, as we like to call it, “cocooning”) and kids are spending their days at home following statewide school closures, game stores are seeing a spike in demand.

“We are a place that offers great at home entertainment,” said Bryan Winter, owner of game store I’m Board! Games & Family Fun. “Suddenly everyone is at home, so we've got a lot of people coming in looking for things to do with the family over the next little while.”

The company, which has stores in Middleton and Sun Prairie, decided last Friday to cancel in-store events “for the immediate future.” But Winter called business “brisk” and said his staff are restocking the shelves as fast as they can.

He’s also added new services to let customers buy games while minimizing physical contact. Those who are willing to drive to the stores but prefer not to go inside may place orders by phone and ask for curbside pick-up.

For those who prefer to stay home, the store also rolled out free delivery on Wednesday, offering the service for any purchase of $40 or more. The first delivery orders have already come in, and orders placed by 2 p.m. will be delivered the same day, Winter said.

Those are the “official rules,” Winter said, implying he might speed up orders placed later in the day too. “We're going to try to be as accommodating as possible.”

More information, including the list of locations for which delivery is available, is on the company’s website.

Across town, Misty Mountain Games on Cottage Grove Rd. is also seeing a steady flow of customers despite canceling in-person events through March 27.

“If you're gonna be stuck at home, you may as well enjoy it,” said Misty Mountain Games store manager Chris Rogers.

Rogers said Misty Mountain continues to see its usual mix of customers, ranging from game aficionados to those to happen upon the shop and want recommendations.

Both shops have opted to close earlier in the evening (8 p.m. at both, with earlier hours on Sundays). With so many no longer bound to their usual work schedules, Winter said more shopping is happening in the daytime anyway.

The shops also sell supplies for role-playing games like Dungeons & Dragons, as well as puzzles, which Winter said have been “crazy popular” in recent days.

“Our puzzles selection is getting pretty picked over as a lot of people think, ‘Oh, there's some long-term thing I can do,'” Winter said. But he and his staff are eager to help customers find the right game for them.

“We have tons and tons of stuff that people probably haven't heard of. Somewhere in our pile of things is something that someone is going to find a good time playing.”

Not all board game businesses are thriving amidst the epidemic. Roll Play is a State Street board game cafe that serves Asian street food and invites customers to play games for a cover charge of $5 for the first three hours.

Or rather, used to invite. Dine-in is off the table following Gov. Tony Evers' Tuesday order shutting down sit-down service in bars and restaurants.

And many of Roll Play’s customers could soon be leaving too. Lee estimates that 70% to 80% of the business’ customers are students, with about half of those being international students.

Many of those international students stuck around after the University of Wisconsin-Madison announced last Thursday that in-person instruction would be suspended until at least April 10. But on Tuesday, the university said the semester would finish out with only online classes, so Lee anticipates many will return to their home countries.

Customers have expressed concern and tipped generously, Lee said. “We are really grateful for that because we do have a community right now, but a lot of our community members are leaving, so I would think that the situation would get worse by the end of March.

“If this situation goes on into April, I think that's going to be a big problem.”

For now, like many restaurants, Roll Play is trying to pivot its services and is considering renting out the games that now sit unused in the cafe, though the shift requires creative thinking.

“The biggest problem we have right now is how to sanitize the board games because we don't want it to be a tool to transmit the virus,” Lee said.

Scientists don’t know exactly how long the coronavirus can live on surfaces; they’re not yet sure if it’s a matter of hours or days. Meanwhile, each game consists of different pieces — often lots of small pieces — so each requires its own sanitization method, Lee said.

The store is compiling a list of games they know how to disinfect, and they plan to make those games available for rental using ChopEats, one of the food delivery apps they currently work with. If all goes as planned, customers will soon receive their games at their doorstep, alongside their fish balls and Chinese crepes.

Meanwhile, some are using technology to play these traditionally in-person games even when they can’t be in the same room.

Brett Myers organizes game meet-ups at local bars and breweries through the Madison Board Games and Beer Facebook page. On a good night, 15 to 20 people would turn out to play and drink.

But Myers called off meetings last week in light of coronavirus concerns, Tuesday's order means meetings are off indefinitely.

“Once the bars closed this week, it was official: There's nothing happening,” Myers said. “And right now, we’re just kind of waiting to see what happens.”

But Myers hasn’t stopped playing. He still squares off face-to-face with his partner, and he and other group members are considering taking their game nights online with apps like Skype or Zoom or using tools like Board Game Arena to switch to the online versions of the games they love.

In his book, it’s a clear win: “Family board games are a real great way to make it through one of these quarantine situations.”

Roll Play pauses the game, levels up the menu

Like a good board game, changing food specials with pan-Asian influences keep things interesting at Roll Play, a board game cafe on State Street.

Roll Play pauses the game, levels up the menu

Like a good board game, changing food specials with pan-Asian influences keep things interesting at Roll Play, a board game cafe on State Street.