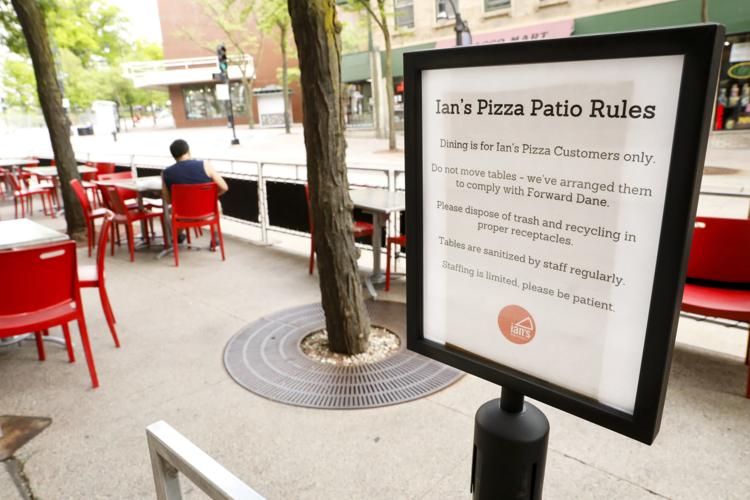 New patio rules have been posted outside of the Ian’s Pizza State Street location. The city of Madison has established a temporary restaurant recovery program that allows for expanded outdoor seating for restaurants (not bars) through Oct. 25. 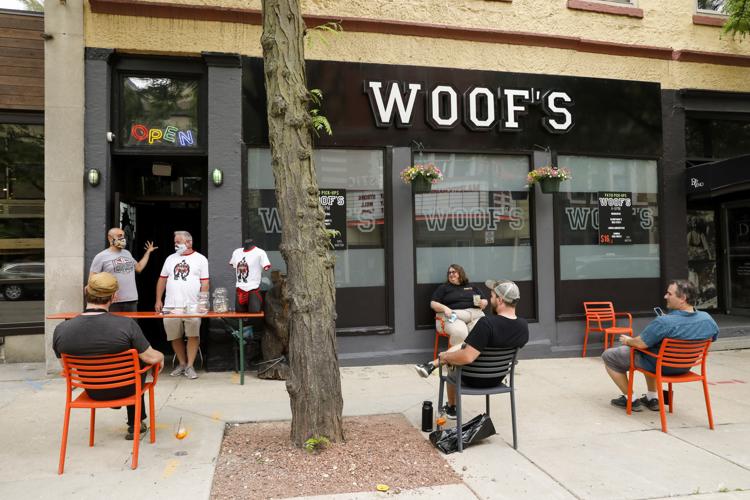 Patrons have drinks on the sidewalk outside of Woof’s on King Street, which reopened Wednesday. Chairs have been placed 6 feet apart, and drinks are being served from a temporary table, stationed outside of the front door.

New patio rules have been posted outside of the Ian’s Pizza State Street location. The city of Madison has established a temporary restaurant recovery program that allows for expanded outdoor seating for restaurants (not bars) through Oct. 25.

Patrons have drinks on the sidewalk outside of Woof’s on King Street, which reopened Wednesday. Chairs have been placed 6 feet apart, and drinks are being served from a temporary table, stationed outside of the front door.

An emergency mayoral order could make it easier to dine out safely this pandemic summer by turning Madison sidewalks, parking lots and downtown streets into open air cafés.

The “Streatery Restaurant Recovery Program,” in effect through Oct. 25, lets restaurants swap street parking spots for tables and chairs. The city has streamlined the process to allow outdoor dining on private parking lots. Restaurants can apply to use public sidewalks for new or additional café seating with requirements lightened and fees waived.

“We’re getting calls citywide,” she said. “Everybody’s trying to figure out what their options are, what’s financially feasible, physically feasible. Everyone wants their staff and customers to be safe, first and foremost.”

As the number of COVID-19 cases continues to rise in Dane County, the CDC advises that low-contact methods like curbside pickup and takeout are the safest way to get restaurant food. But, because of better airflow and the ability to stay further away from other diners, outdoor dining is considered safer than sitting indoors.

Many restaurants have been closed or subsisting on takeout and delivery since Gov. Tony Evers’ “safer at home” order on March 25. On May 26, as part of Phase One of a multi-step “Forward Dane” plan, Madison and Dane County allowed bars and restaurants to reopen for limited dine-in service (25% of capacity) with social distancing measures in place.

Some reopened right away. Others have been more wary, weighing risks and costs against limited potential revenue.

The Marquette Neighborhood Association drafted a letter to Mayor Satya Rhodes-Conway on May 20 and sent it earlier this week. It requested, among other things, “an expansion of capacity for all existing outdoor dining areas” and “an elimination of application fees for outdoor permits.” The Central Business Improvement District had similar requests.

“What we started seeing was concerns from the owners of restaurants and taverns in our district, and we’re quite heavy on those,” Kear said. “The clock is ticking. We realized that if folks were going to get the chance to land on able footing, they needed to have the most opportunities for outdoor service that they could.”

The new order applies only to restaurants (where sales of alcohol account for 50% or less of the gross receipts). A description provided by the city notes that the emergency “Streatery” plan is not intended to encourage larger crowds or events. It cautions that restaurants should seat diners in accordance with physical distancing requirements — no more than six people in the same household or family unit per table, each table six feet from the next.

Downtown “café zones” avoid Metro bus routes and main thoroughfares, and every closed street would maintain fire and bike access as well as a delivery lane. Each business must provide its own temporary outdoor materials: tables, chairs, lighting, signage, enclosures.

Explaining why bars were not included, deputy mayor Leslie Orrantia said they were deemed too risky.

“As we aim to reopen our community’s businesses, public health remains our top priority,” Orrantia said via email. “Expanding this program to bars could result in careless patron behaviors that risk community spread of COVID-19 that we’ve worked tremendously hard as a community to prevent, so at this time, we’re exclusively opening the program to restaurants.”

If the city decided to expand the purview of this order, downtown Madison bars stand to also benefit from a relaxing of sidewalk restrictions. Vanessa Shipley, co-owner of Maduro at 117 E. Main St., said being able to expand the outdoor patio would be “amazing.” The cocktail and cigar bar reopened on Wednesday afternoon with several bar stools removed and menus placed under glass.

“Our biggest three months of the year are June, July and August, and the patio is always full,” Shipley said. “There’s limited parking on this street anyway. I would take a bigger patio over a couple parking spots. This way we could have more room for everyone outside.”

Jason Hajdik owns BarleyPop Live on East Main Street. Outdoor seating options for summer and fall could be a game-changer for his business, which has been closed since mid-March.

“If the city works with opening up parking lots and doing limited street closures ... it would make our decisions easier and make it safer for everybody,” said Hajdik, who also owns BarleyPop Tap & Shop at 2045 Atwood Ave. That location has been focusing on retail and recently opened the two small sidewalk tables in front of the shop.

“Inside is not nearly as safe as outdoors is. It’s so much safer,” Hajdik said. “It’s in everybody’s best interest to make things as easy as possible to go outside.

“It’s only going to work for half the year, but we’ll deal with that next problem when we get there.”