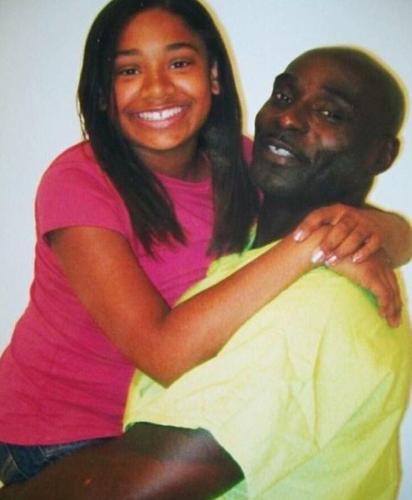 A young Teeanna Brisco poses for a photo with her father, Bernard Brisco, who spent most of Teeanna's childhood in prison on federal drug charges. 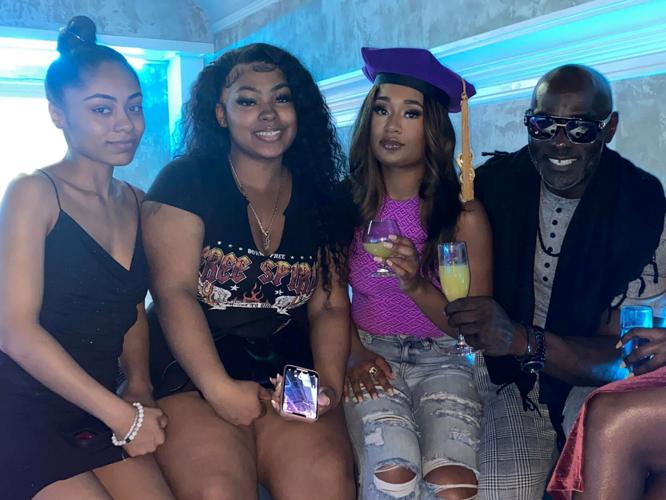 Teeanna Brisco, second from right, and father Bernard Brisco pose for a photo at Teeanna's graduation from Howard University School of Law.

Teeanna Brisco, 24, has been planning for a career in law since third grade. It was her own idea, but her parents, who had separated when she was little, both encouraged her, pushing her to keep her grades up.

But while her mom, Tina Jeremiason, met with Teeanna’s teachers and checked her homework at their Madison home, her dad, Bernard Brisco, did all his encouraging from federal prison. He was serving a life sentence plus more than 100 years on charges of distribution of cocaine, crack cocaine and marijuana and conspiracy to distribute.

More than 5 million U.S. children have had a parent in jail or prison, according to a 2016 report by the Annie E. Casey Foundation. In Wisconsin, it’s one in every 14 kids. Studies show those children suffer a slew of negative consequences, including that it’s difficult to maintain a relationship with a parent behind bars.

But Teeanna’s mom made sure to keep Teeanna and her dad connected. She sent him every report card, and he’d call at least once a week. It wasn’t easy to get to the Indiana and Tennessee prisons where Bernard spent years, but Teeanna would make the trip with relatives when she could.

As a child, she’d listen for news about his various appeals, hoping to one day see her dad in the free world. Later, she wrote letters and a petition to urge President Barack Obama to commute her dad’s sentence.

“The key players in the situation were always attorneys,” Teeanna said, from the lawyers who brought her dad’s appeals to the judges who’d decide his fate. “So, probably around 7 or 8, I was like, ‘Yeah, I'm gonna be a lawyer one day.’”

She held onto that plan through high school at La Follette. When Trayvon Martin was killed in 2012 and his killer, George Zimmerman, was subsequently acquitted, Teeanna watched the Black Lives Matter movement unfold.

“I just couldn't not know certain things. I was so eager to understand how certain things impacted people of color and Black people,” Teeanna said. She talked with her dad about her interests, and he’d suggest things to read up on.

The studious high schooler became increasingly aware that, as a Black American, she was “watched differently.” On prom night, as she and her date drove on Madison’s west side to meet friends for a photo shoot before the dance, a police officer pulled them over. By Teeanna’s recollection, it was a broken taillight. But then the officer ordered the pair out of the car and then called in the dogs.

“I was only in high school, but I remember feeling like I know enough at this point to know that you're just taking it too far,” Teeanna recalled.

She headed to Northern Illinois University, becoming the first in her family to graduate college. For law school, she chose Howard University for its legacy of training the lawyers behind key civil rights victories, including future Supreme Court Justice Thurgood Marshall.

After the pandemic hit, she spent half of law school in online classes and exams, whether back at her mom’s place in Madison or in her Washington, D.C. apartment. It was discouraging, but she regularly thought about everyone who was rooting for her, from her dad in his prison cell to her younger relatives.

“It was just going to feel very rewarding for my nieces and nephews to see something positive and know that any person from any background can do something like this,” Teeanna said.

Last spring, the family learned that Bernard’s co-defendant had been granted early release under the 2018 First Step Act, which authorizes federal courts to reduce sentences for certain crimes. Bernard and his attorney decided to request his release too, submitting more than 100 pages to support their case, including letters from Teeanna and her siblings.

The same judge who’d first heard Bernard's case granted the motion. “I believe it was my letter, but more so, my children’s letters,” Bernard said of the judge’s decision.

Then, last week, 20 years after boarding a plane in Madison en route to a federal prison in Kansas, Bernard took his first flight as a free man. This time, he was headed to Washington, D.C. to see his daughter graduate law school.

On Saturday, May 7, he was there in the crowd at the law school’s hooding ceremony.

“When they called Teeanna Brisco to walk across the stage, me and my family and our friends erupted like every other family did, celebrating those young folks that have done so well with their lives,” Bernard said.

Now back in Byhalia, Mississippi, where he moved after his release to care for his elderly dad, Bernard is still adjusting to being free. In prison, he earned a GED and hundreds of certificates, but paying for his various appeals meant he couldn’t afford to earn a college degree behind bars. After a stint of working, he’s currently unemployed. He’s hoping to get a commercial driver’s license and start driving trucks. He also started a Chicago-based nonprofit called Fathers Furthering Families, focused on helping families keep two parents in the home.

He knows his kids are still adjusting to his release too. For Teeanna, it’s little things, like being able to call her dad whenever she wants, rather than waiting by the phone for him to call her through the prison phone system. “I've never been able to pick up the phone and call him,” Teeanna said.

She’s getting ready to study for her July bar exam, and she’s already lined up a job as a patent attorney at the Washington, D.C. law firm where she worked for two summers. She’s looking forward to doing other types of legal work on a pro bono basis.

“It don’t matter their color, good lawyers — honest and god-fearing attorneys — can help create a more just system … because surely men shouldn't have to die in prison for the selling of drugs.”

Though he speaks without bitterness about the two decades he spent separated from his children, he believes that in those last few years, his children became “a little broken.” He too was getting weary, beginning to question God, he said.

“I told (my family) for so long, ‘Just hold on. I'll be there. I’m coming. I’ll appeal this, (file) this motion. And it just never happened until it happened. It happened right on time, right before graduation,” Bernard said.

“She managed to accomplish a lot on her own … I know I was there in spirit with her. I’m real proud of her. Everyone is.”

I went to law school because my dad was sentenced to life in prison for non-violent drug crimes. I did what I could to get him out. He did 20 years and got out right in time for my graduation. pic.twitter.com/Celu1qeknB