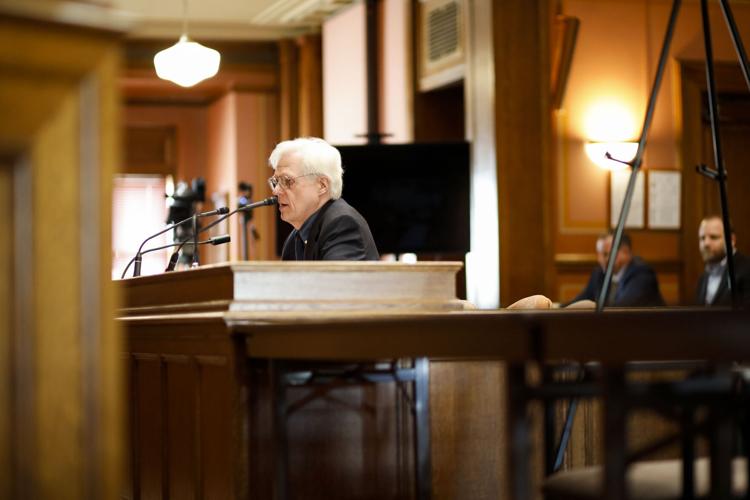 Bruce Erdmann, a licensed psychologist, speaks on behalf of the Wisconsin Psychological Association during an Assembly Committee on Regulatory Licensing Reform hearing. As Wisconsin faces shortages of professionals in fields ranging from nursing to social work, untold numbers of would-be workers wait months for their licensing applications to be approved. 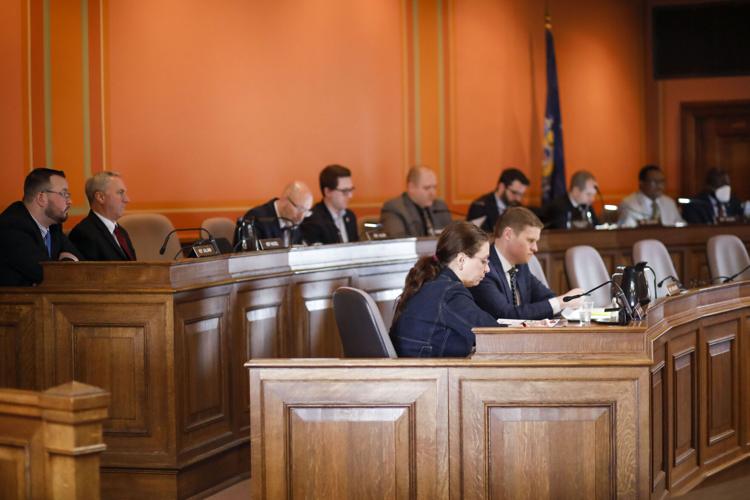 The Assembly Committee on Regulatory Licensing Reform listens to testimonies during a hearing at the state Capitol. 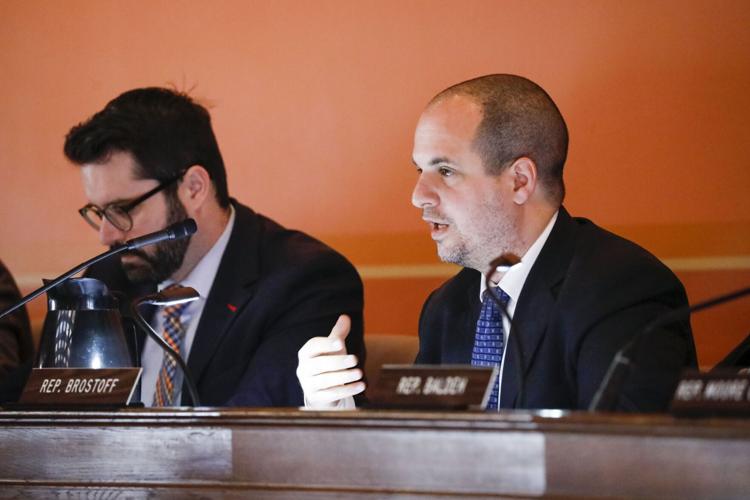 Rep. Jonathan Brostoff, the ranking Democrat on the committee, said in a statement after the meeting that “today’s informational hearing on the licensing backlog at DSPS reinforced what everyone working on this issue already knew: this is a manufactured crisis, and one that can be easily remedied.”

Amber Schlies drove three hours from her home near Crivitz to testify at a Wednesday legislative committee hearing about the state’s massive backlog of professional license applications. Compared to the 14 months the young social worker spent waiting for her license to be processed, it was a short journey.

Schlies applied in January 2021 for the license that would allow her — a social worker serving children and adults with substance use or mental health issues through Marinette County’s Comprehensive Community Services — to practice without supervision. Wisconsin’s Department of Safety and Professional Services, the agency that processes such applications, recommends applying two to three months before the license is needed.

More than a year later, Schlies was still waiting. She’d submitted additional documents when the agency requested them, and resubmitted others. She’d called DSPS several times and spent hours on hold, trying to find out what was holding up the process. Soon, her supervisor was calling, too.

In late February, Schlies called state Rep. Jeff Mursau, R-Crivitz. Within days, she received an email saying her license had been issued.

“What went through my head? That I was finally done. That I didn’t have to deal with it anymore,” Schlies told the Cap Times after testifying.

For Derek Tyus, of Madison, the wait continues. He also applied more than a year ago for a social work license, but despite multiple attempts to contact DSPS, he’s still not sure whether the agency has received the additional documents he’s sent.

The delay means fewer therapists are available to meet the mental health needs of Madisonians. An advanced practice social worker, Tyus currently provides therapy for clients with schizophrenia or bipolar disorder at Madison’s Program of Assertive Community Treatment — but only when one of two supervisors can sit in.

He applied for a temporary license that would let him provide therapy on his own while he’s waiting, but that’s still pending, too. “With this licensure … I'll be a lot more independent in my job,” Tyus said in an interview. “We don't have the staff to be having two people do therapy.”

In April, he’ll take his final licensing test, which would be the last step to receiving his full license — assuming his application is processed by then.

“I can't get anyone to answer a question or answer a phone call or do anything. I don't know if they've lost it or received it or anything,” Tyus said. “It’s very frustrating.”

Schlies and Tyus aren’t alone in their experiences. As Wisconsin faces shortages of professionals in fields ranging from nursing to social work, untold numbers of would-be workers wait months for their licensing applications to be approved. The agency’s Google reviews include dozens of complaints about delayed applications.

The problem isn't unique to Wisconsin. National investigations by NPR and NBC have found significant backlogs in states across the country, though the length of delay varies.

Speaker after speaker — from a variety of professional backgrounds requiring licenses to practice in Wisconsin — told the Assembly Committee on Regulatory Licensure Reform on Wednesday that long delays on DSPS approving professional licenses are hurting their industries.

Republican lawmakers on the committee questioned whether the backlog can be attributed to a large portion of DSPS staff working from home.

But a representative from DSPS dismissed those concerns and cited different reasons for the backlog.

Michael Tierney, legislative liaison for DSPS, told committee members during nearly two hours of testimony that lawmakers need to approve more full-time staff for DSPS in order for the agency to address its long backlog of license applications.

Currently, Tierney said, DSPS has just one staff member for every 27,500 license applications the department receives.

Tierney also said the agency’s call center has been flooded in recent weeks. In an average week, he said, DSPS receives between 3,400 and 4,400 calls from people with questions about the licensing application process. In one week last month, Tierney said the number of calls topped 10,000.

Tierney said requiring licenses for more professions, adding more requirements to receive a license for some professions and interstate compacts that allow people licensed in other states to work in Wisconsin have all resulted in the sharp increase of license applications in recent years. However, he noted, the number of staff DSPS has reviewing applications has largely stayed the same.

“The solution to concerns with licensure today is simple,” Tierney said. “The Legislature needs to allow the fees people pay to be used for their intended purpose. As the governor has proposed, the Legislature needs to allow the department to use license fees to add the staff necessary to handle the volume of work and improve antiquated systems that do not support the way society operates in the present day.”

Democratic Gov. Tony Evers has proposed resources to add additional full-time staff in both of his budget proposals. Republican lawmakers only partially fulfilled those requests.

“Unfortunately, the Legislature has come up short on approving those requests, and this inaction has created a legislative barrier to timely licensure,” Tierney said.

Additionally, Tierney said, the Legislature could empower DSPS to address staffing shortages without having to spend tax revenue to pay more staff.

“To be very clear, applicants pay fees that are ample to pay for the staff needed to process these applications in a timely manner,” he said, adding that the Legislature pulling a portion of collected fees away from the department for the state’s general fund has resulted in understaffing.

Tierney expressed irritations with lawmakers' refusal to provide DSPS the funds needed to hire more staff, especially because many of those legislators are placing calls to DSPS to inquire about license applications submitted by their constituents.

“Personally, I'm finding it increasingly frustrating that many of the same legislators who do not support additional legal staff have no qualms at all about contacting the department and saying, ‘my constituent needs to go first,’” Tierney said.

Several lawmakers on the committee, Republicans and Democrats alike, told those testifying to contact their offices about the delays in receiving their licenses.

Rep. Jonathan Brostoff, the ranking Democrat on the committee, said in a statement after the meeting that “today’s informational hearing on the licensing backlog at DSPS reinforced what everyone working on this issue already knew: this is a manufactured crisis, and one that can be easily remedied.”

“As was made clear today, the main issues contributing to the licensing backlog are the same they have been for years now — year after year, Republicans have refused to provide DSPS with adequate staffing levels to process licensing applications,” Brostoff, of Milwaukee, said.

For Dennis Kaster, president of the Wisconsin chapter of the American Physical Therapy Association, the finger-pointing doesn’t solve his problem.

“I ask you to please put aside party politics and work on this collaboratively to solve it soon,” Kaster told the committee. “We cannot wait. We need to put Wisconsin patients first and solve this.”

The U.S. is projected to need about 850,000 more telecommunications workers by 2025. To fill the gap, this Cottage Grove-based company is looking to veterans.

The U.S. is projected to need about 850,000 more telecommunications workers by 2025. To fill the gap, this Cottage Grove-based company is looking to veterans.