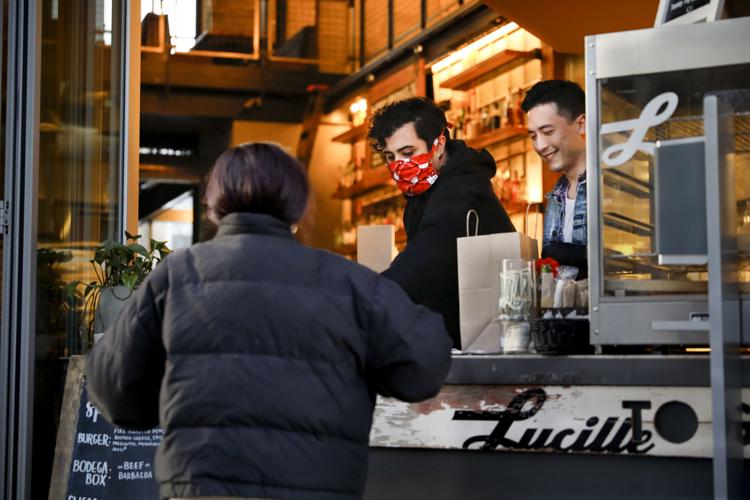 Jonathan Rodriguez and Josh Modjeska serve Friday Fish Fry carryout orders through an open window at Lucille at 8:11pm on May 8. 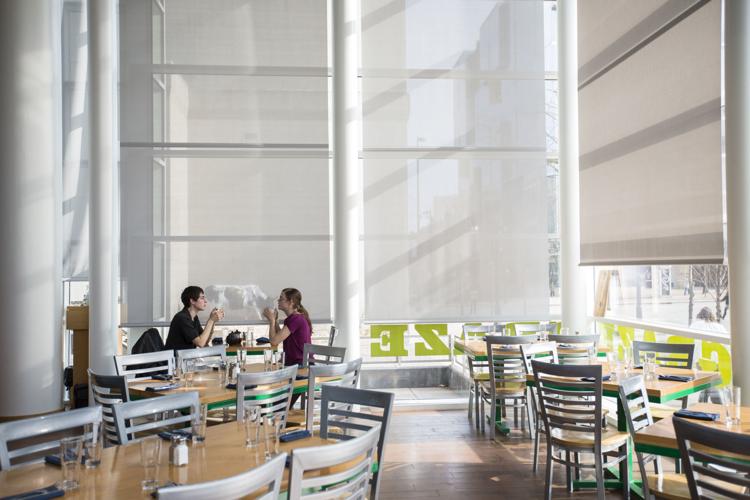 During lunch hour at Graze on 1 S. Pinckney St. on March 07, 2016 in Madison, Wisconsin. PHOTO BY SAIYNA BASHIR

Jonathan Rodriguez and Josh Modjeska serve Friday Fish Fry carryout orders through an open window at Lucille at 8:11pm on May 8.

During lunch hour at Graze on 1 S. Pinckney St. on March 07, 2016 in Madison, Wisconsin. PHOTO BY SAIYNA BASHIR

While Madison-area restaurants can open Tuesday for limited in-person dining, some owners say they’re not looking to welcome patrons back into their establishments for meals for another few weeks — if not longer.

Their hesitation comes with fears about the health and safety of their employees and customers, as well as concerns that operating at a 25% indoor capacity wouldn’t make financial sense.

“The reopening for our restaurants is not something where we’re looking to snap our fingers and then Tuesday be taking customers,” said chef Tory Miller of the Deja Food Restaurant Group, which includes L'Etoile, Graze and Estrellón.

“As businesses, you have to be responsible,” he said. “Otherwise you do yourself a disservice and you’re going to end up getting shut down anyway.”

Madison and Dane County announced Friday that restaurants, bars and other establishments are allowed to open for limited dine-in service with social distancing measures in place starting at 8 a.m. Tuesday. This move marks the transition to Phase 1 under the “Forward Dane” plan to reopen businesses and loosen restrictions on activities.

But while they have the ability to operate, a few restaurant owners said they aren’t planning to do so starting this week. Instead they will continue carry-out or curbside pickup options as they prepare for a time where they’re ready to reopen their dining rooms.

Tami Lax, who owns Harvest Restaurant and The Old Fashioned Tavern on the Capitol Square, said she doesn’t know when either establishment will allow in-person dining again.

“Our number one concern is to keep the community and staff safe from contracting (COVID-19) and we are not there,” Lax said Friday. “For us, we do not feel it’s a safe environment.”

Under the order, restaurants would have to space tables six feet apart and only seat up to six guests who are all living together at the same table. Owners would also have to develop written policies and procedures surrounding hygiene, cleaning and protective measures.

Miller said his restaurants hope to open in the first or second week of June. That plan depends on the timing of new government orders. Contributing to the uncertainty is that opening up in-person dining again isn’t as easy as removing a few tables and bringing staff back, Miller said.

Restaurants would have to develop their own safety protocols, train staff on those and build up their inventory again, all while getting a dining room that hasn’t been used in two months ready for diners who might not be ready to accept the new experience.

“You always knew what to do,” Miller said. “You go in, make the menu, you sell food, people come, they eat it, they love it, they go home. Now it’s not that way anymore.”

Traditionally, a L'Etoile dining experience could last more than two hours and include a seven-course menu. Now that doesn’t seem possible, given people’s expected comfort levels and the new public health reality. Lax echoed those concerns. She questioned whether customers would welcome being served by staff wearing protective gear such as gloves, masks and shields.

“I don’t think the community is ready for that,” Lax said. “To me, that’s not a super pleasant dining experience.”

Other establishments aren’t planning to open their dining rooms this week, either, including at least three Madison-area Culver’s locations — on Todd Drive, Cottage Grove Road and in McFarland.

Susan Bulgrin is an owner of those three locations. She didn’t comment further, but noted the sites will still be open for drive-thru and curbside orders.

As bigger restaurants weigh possibilities, smaller establishments like Fair Oaks Diner are making their own shifts. The diner closed completely two months ago but is planning to offer carry-out starting June 2.

Two months ago, before deciding to close temporarily, Austin briefly offered curbside pickup, but with limited success. But now she’s planning on doing it solo so her three full-time employees can continue collecting unemployment benefits.

“I’m really nervous because I’m doing this in such a different way,” she said. “It’s like starting a new job after 28 years.”

Until further notice: Madison businesses struggle to deal with the coronavirus fallout

While both Miller’s and Lax’s restaurants have seen interest in to-go orders and curbside pickup, they said the activity was only covering, at maximum, a quarter of their regular business.

Until officials allow dine-in service to be at least 50% of capacity, with continued carry-out and to-go orders on top of it, Miller said it wouldn’t be worth reopening L’Etoile, Graze and Estrellón.

Right now, said Lax of Harvest and Old Fashioned, restaurants are only operating to cover the bills that are coming in. If she opened Harvest with 25% of dine-in seating capacity, the restaurant -- which needs 35 diners per night to break even -- would lose money.

“To add more staff, to open our doors, dividing tables, it would make it even worse,” Lax said. “Our bottom line would be less than break-even, and if we can’t break even then we can’t be there.”

The Old Fashioned is bigger, but Lax said that size also means a larger staff and inventory. The overhead there is “enormous,” she said, with rent and insurance costs.

“It’s really the uncertainty that’s so crushing,” Lax said. “It’s not going to return to normal, I speculate, for at least a year.”

If restaurants open too early, she said, “I feel like our community is going to slide back into the bad numbers and we’re going to have to shut down completely again. I’m doing all this with a ton of caution.”

Before the pandemic struck, the restaurant business was already difficult, with low profit margins and high competition. Going forward, Miller said changes would need to be made to ensure businesses’ viability.

“Our profit margins were less than 10% before,” he said. “You’re really looking at a devastated industry.”

As local officials move to slow the spread of the coronavirus, schools and other local institutions cancel events and plan for a disrupted spring.

One injured in State Street shooting, police searching for suspect