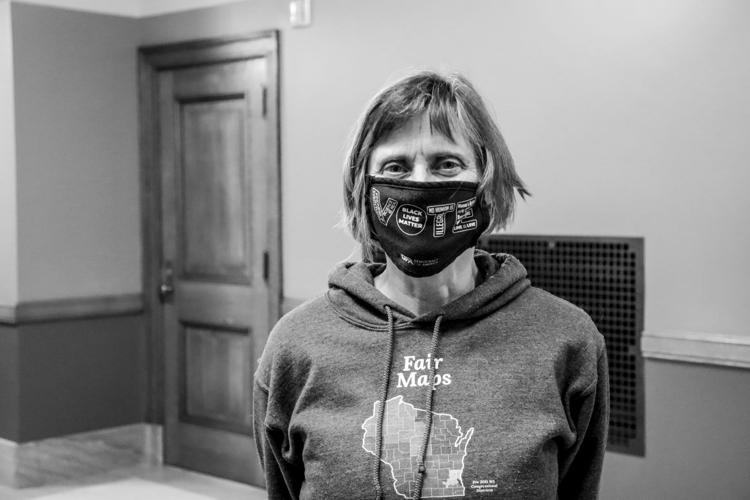 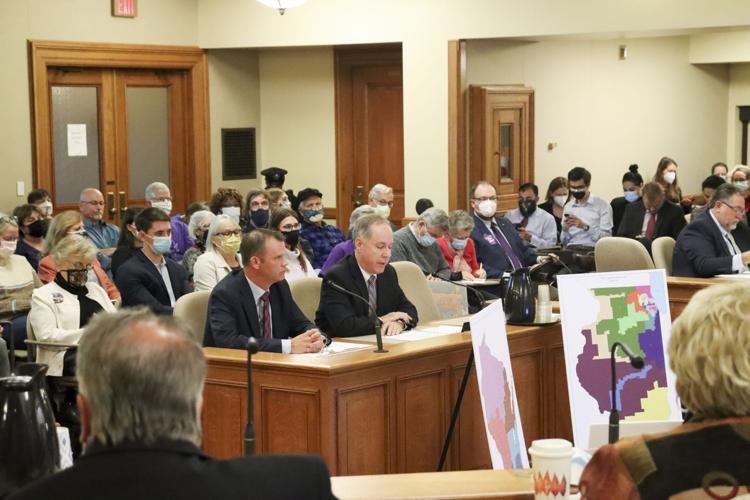 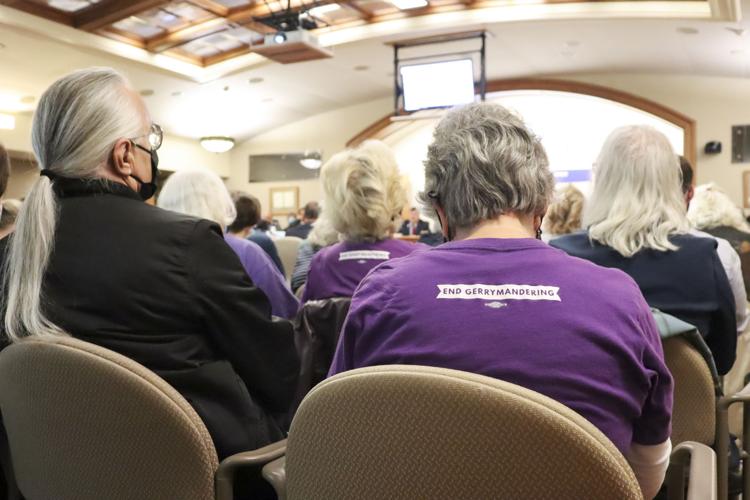 Crowds and legislators gather at the Wisconsin State Capitol Building for a redistricting hearing on Thursday, Oct. 28, 2021. 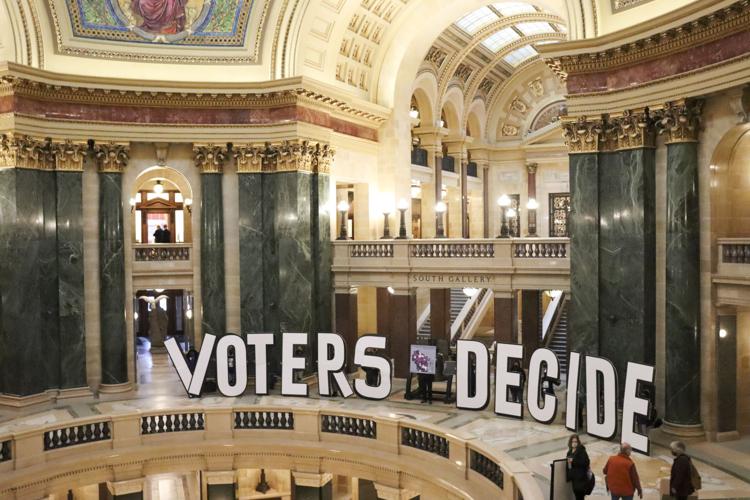 Anti-gerrymandering advocates hold a demonstration before a public hearing at the Capitol building on Thursday, Oct. 28, 2021.

It was a cold and rainy morning in Sheboygan when Geralyn Leannah hit the road. It was 5 a.m. — the sun wouldn’t be seen for hours — but she was up and on her way to Madison.

Leannah, 64, was one of hundreds of Wisconsinites who flocked to the state Capitol building Thursday for a hearing being held by the Senate Committee on Government Operations, Legal Review and Consumer Protection.

The hearing welcomed the public to comment about a redistricting proposal unveiled by Republican lawmakers last week. Leannah was one of roughly 150 people who registered to speak before the committee and waited — masked and wearing a grey Minocqua Brewing Company “Fair Maps” sweatshirt — for hours for her few minutes before lawmakers.

She told the Cap Times after her testimony that the proposal put forth by Republicans won’t allow her voice to be heard in Sheboygan.

“We had a terribly gerrymandered district in Sheboygan in the 2020 election for state Assembly,” she said. Her neighbor ran for a seat in the Assembly last year. However, Leannah couldn’t vote for her, she said, because she was running in a different district — despite living just a few blocks away.

Leannah expressed frustration that her community of interest — groups that the Wisconsin Constitution dictates there should be “a good faith effort” not to split up while redistricting — had been splintered, and she couldn’t support someone she believed in. She wanted to tell the committee that this, to her, was not acceptable.

Grace Quinn, a 19-year-old college student from Appleton, also made the drive to deliver a fiery testimony before the committee. She told the Cap Times after that she is “terrified for the state of our democracy” and “for the future and future generations.”

A climate advocate, the part-time barista said “these maps are going to dictate the next 10 years.” Quinn expressed concern that if the partisan gerrymander Wisconsinites have voted under for the past decade continues, the Legislature won’t take needed action to mitigate the effects of climate change.

“It’s a fight you have to fight,” she said of her willingness to testify before the committee even though Republicans will likely approve the maps in short order. “Even though you know you're going to lose, you fight it anyway.”

The GOP leaders gave lengthy explanations about the variables considered while drafting the proposed maps. Among the guideposts used to draft the maps, Vos and LeMahieu said, were the principles of core retention and avoiding incumbent pairing.

Core retention is the concept of maintaining as much as the current districts as possible; incumbent pairing is when new districts would require two existing incumbents to battle to represent a newly drawn district.

A joint resolution approved by Republican lawmakers last month asserted that the new maps should “retain as much as possible the core of existing districts.” Vos said during his testimony that they wanted to build off of the 2011 maps because they were already found to be constitutionally sound.

However, Robert Yablon, a University of Wisconsin-Madison law professor, noted during his own testimony that in 2016, a federal three-judge panel deemed the maps unconstitutional. When that ruling was appealed to the United States Supreme Court, he noted, the case was dismissed on a technicality, not on the merits, challenging the speaker’s assertion that the maps were a constitutional foundation to build from.

“Wisconsin law nowhere instructs mapmakers to defer to prior maps,” he said.

“Continuity seems to have loomed larger than the state constitution’s express geographic requirements,” he said, adding that retaining prior districts “is valuable only to the extent that the status quo is worth preserving.”

Vos also argued that Democrats are in the minority in both chambers of the Legislature because they have an agenda that does not appeal to most voters in the state, not because of the uncompetitive nature of most legislative districts. He said Democrats don’t appeal to people beyond Madison’s isthmus.

The crowd responded to Vos’ comments with jeers, forcing Sen. Duey Stroebel, the Republican co-chair of the committee, to threaten to clear the hearing room.

Sachin Chheda, executive director of the Fair Elections Project, used a substantial amount of his testimony in front of the committee to try to disprove Vos’ claim that Democrats don’t appeal to voters outside of Madison and Milwaukee.

Chheda said the political bias statewide only favors Republicans by 2 or 3%, so under maps with a less extreme gerrymander, the GOP’s dominance in the Legislature would be reduced.

Vos also acknowledged during the hearing — while LeMahieu denied it moments earlier — that Republicans considered partisanship while drawing the new maps.

“It is not illegal or unconstitutional to consider partisanship,” Vos said in response to a question about the criteria that were used to draw the maps.

Debra Cronmiller, director of the League of Women Voters of Wisconsin, was among the advocates opposed to the proposal. She called on lawmakers to reject the proposed Republican maps in an effort to avoid another 10 years of “hyper-partisanship.”

“Restoring good government hinges on fair maps that are free from partisanship,” Cronmiller said. “Elected officials protected by gerrymandered maps do not have to represent the will of voters.”

Yablon, Chheda and Cronmiller all registered against the proposal, as did the majority of speakers Thursday.

The Republican lawmakers’ proposal would maintain GOP dominance over the Legislature. According to a memo from the nonpartisan Legislative Reference Bureau, the average core retention rate is 84.16% for Assembly districts and 92.21% for Senate districts.

An analysis from the Princeton Gerrymandering Project found that the GOP-proposed Assembly, state Senate and congressional districts all create a “significant Republican advantage.”

The project, which does “nonpartisan analysis to understand and eliminate partisan gerrymandering at a state-by-state level,” gave all three maps an overall “F” grade, meaning the proposals “could be much better.”

A separate analysis of the proposed maps completed by the Campaign Legal Center found that Republicans would be expected to win 14.8% extra Senate seats in a “hypothetical, perfectly tied election,” and 12% extra Assembly seats in the same scenario. The CLC analysis predicts that, if 48% of statewide votes went to Democrats and 52% to Republicans, Democrats would win 30% of Senate seats and 34% of Assembly seats.

Republican legislative leaders indicated earlier this month that they plan to pass the proposed maps by Nov. 11. Gov. Tony Evers, a Democrat, is expected to veto the Legislature’s proposal, teeing up the state Supreme Court or a panel of federal judges to draw the maps.

Jessie Opoien contributed to this reporting.

Gov. Tony Evers doubled down that he will veto proposed voting maps put forth last month by Republican lawmakers if they are approved. “As a former teacher, I’ll just say this: (GOP lawmakers) clearly didn’t understand the assignment."

Gov. Tony Evers doubled down that he will veto proposed voting maps put forth last month by Republican lawmakers if they are approved. “As a former teacher, I’ll just say this: (GOP lawmakers) clearly didn’t understand the assignment."