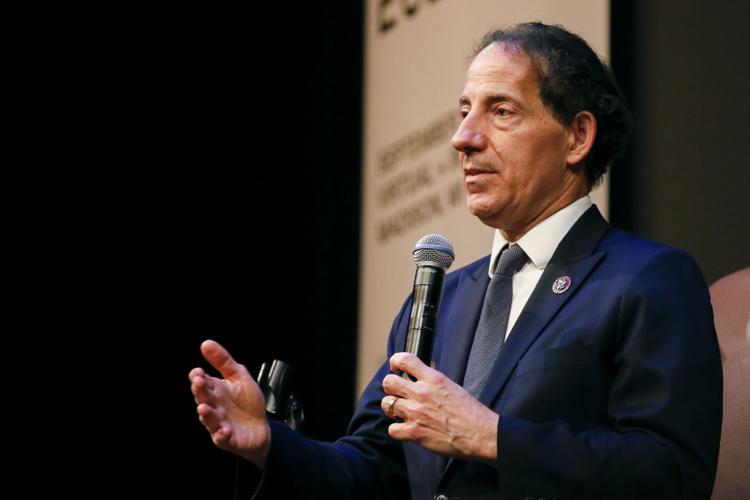 U.S. Rep. Jamie Raskin, a Democrat from Maryland and a member of the House committee investigating the Jan. 6, 2021 attack on the U.S. Capitol, spoke Friday evening at Shannon Hall at the University of Wisconsin-Madison. Cap Times associate editor John Nichols hosted Raskin as part of Cap Times Idea Fest. 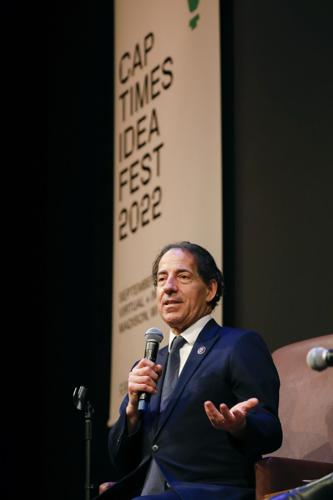 Maryland Democratic congressman Jamie Raskin believes the United States could be on the cusp of a democratic breakthrough. 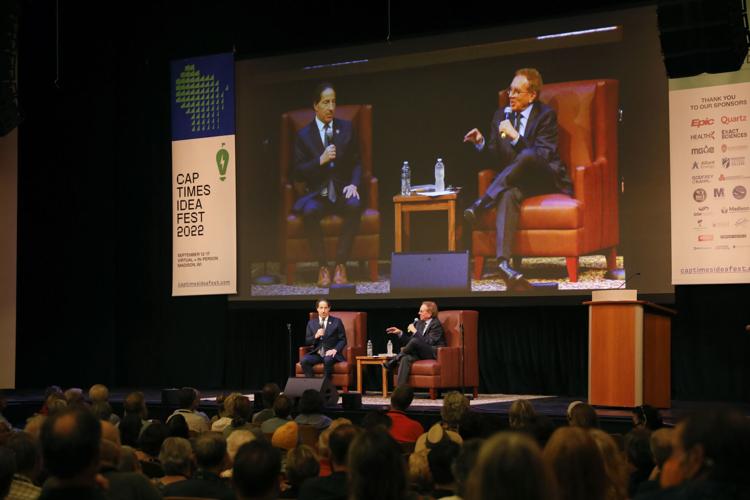 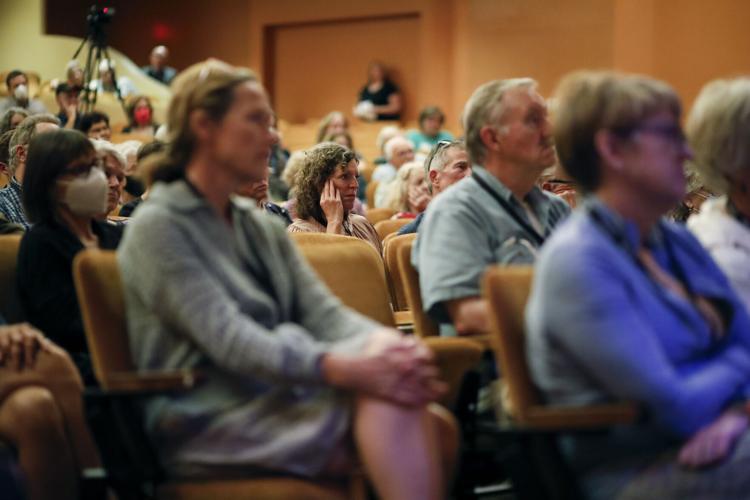 Guests listen as Jamie Raskin answers questions and gives an optimistic outlook on the future of the United States. 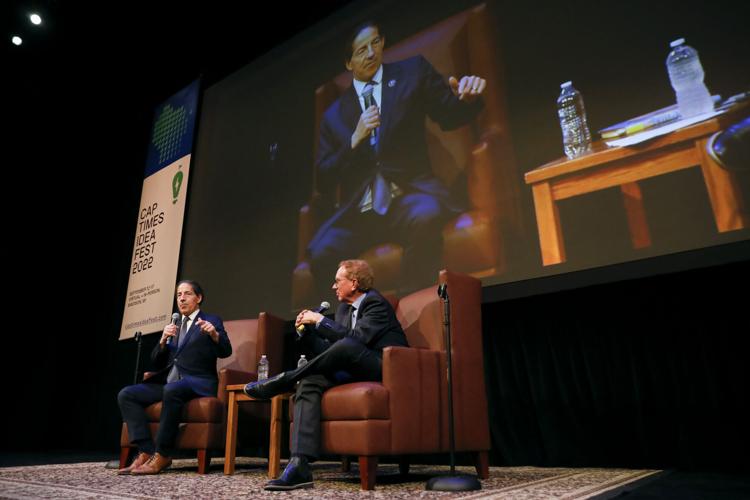 U.S. Rep. Jamie Raskin, a Democrat from Maryland and a member of the House committee investigating the Jan. 6, 2021 attack on the U.S. Capitol, spoke Friday evening at Shannon Hall at the University of Wisconsin-Madison. Cap Times associate editor John Nichols hosted Raskin as part of Cap Times Idea Fest.

Maryland Democratic congressman Jamie Raskin believes the United States could be on the cusp of a democratic breakthrough.

U.S. congressman Jamie Raskin believes the United States could be on the cusp of a democratic breakthrough.

Raskin, a Democrat from Maryland and a member of the House committee investigating the Jan. 6, 2021 attack on the U.S. Capitol, spoke Friday evening at Shannon Hall at the University of Wisconsin-Madison. Cap Times associate editor John Nichols hosted Raskin as part of Cap Times Idea Fest.

“We have overthrown the superstitions and the bigotries and the hatreds of the 20th century, and what's going on now is the last gasp of authoritarianism and racism and antisemitism,” Raskin said. “But when we get through that, we've got the opportunity to create a democratic civilization, in America and all over the world, that honors and respects every single person.”

Raskin has been working with six Democrats and two Republicans to investigate the people, funding and motivations involved in the Jan. 6 attack, led by a mob of supporters of former President Donald Trump who sought to prevent the 2020 election from being certified.

The riot led to several deaths, many injuries and damage to the building.

Raskin referred to the former president as a “one-man crime wave.” He expects Trump is counting on the fact that “nobody can figure out what it would mean to send a former president to prison (with a Secret Service presence).”

While the committee and the general public are aware of the basic elements of Trump’s efforts to overturn the 2020 election, Raskin said, the committee still has “loose ends” to tie up. It’s expected to deliver a final report by the end of the year.

Included in that report will be legislative recommendations on “how to fortify American democratic institutions against coups, insurrections, political violence and electoral sabotage,” Raskin said.

Asked whether the committee will seek testimony from conservative activist Virginia “Ginni” Thomas, Raskin said it is “trying to bring people forward who are telling the truth, and have the most important information to convey.”

In its investigation, the committee has spoken with more than 1,000 people, Raskin said, adding that it is not clear to him whether Thomas was a major player in the events of Jan. 6.

Thomas is married to U.S. Supreme Court Justice Clarence Thomas, and pressed state legislators in Wisconsin and Arizona to overturn President Joe Biden’s 2020 victory. She also urged then-White House chief of staff Mark Meadows to continue the same effort, and earlier this year said she attended the “Stop the Steal” rally that preceded the Jan. 6 attack.

“I've not yet seen testimony from Ginni Thomas that would suggest to me that it's warranted to give her a national platform at this point,” Raskin said. “But her particular involvement raises profound questions about the Supreme Court, and her husband and so on. … those are not really within the jurisdictional purview of our investigation.

Other congressional committees might be interested in speaking with Thomas, he said. Was Jan. 6 a coup attempt? “That was part of it,” Raskin said.

He described “three rings of seditious activity.” The least dangerous was the outer ring of the mob. In the middle ring were rioters who stormed the Capitol, assaulted police officers, called for the hanging of former Vice President Mike Pence and attempted to track down specific officials in the Capitol.

The “scariest ring,” Raskin said, was “the ring of the coup” — Trump and others in positions of power who sought to overturn the election amid mob violence.

Beyond the Jan. 6 investigation, Raskin spoke in favor of major changes to (or the elimination of) both the filibuster and the Electoral College. He also argued for statehood to be granted to Washington, D.C. and Puerto Rico.

The filibuster — a Senate procedural rule that requires 60 votes to end debate and allow a vote on most measures — is a “profoundly anti-democratic instrument,” Raskin said. A growing number of Democrats have called in recent years for an end to the practice, noting that it was used in previous decades to block civil rights legislation.

Exceptions to the rule exist, and Raskin argued carve-outs should be made for legislation related to “democracy and voting rights.”

The congressman also said dismantling the Electoral College system would be “very consistent with our entire constitutional development.” The system “has proven to be a danger to us,” he said.

Raskin is a constitutional scholar, and said his reading of the document views the 17 amendments adopted since the Bill of Rights as being “overwhelmingly” supportive of democracy, suffrage and equality. Every person’s vote should count equally, Raskin said,

“We spend millions of dollars every year trying to export American electoral democracy to other countries that are writing constitutions and developing their practices,” Raskin said. Those countries never want to replicate the Electoral College.

The congressman had harsh words for the Republican Party in its current state, though not for Wyoming Rep. Liz Cheney and Illinois Rep. Adam Kinzinger, who both voted to impeach Trump and currently serve on the Jan. 6 committee.

“That party has been turned into just a nest of vipers and miscreants and misanthropes and racists,” Raskin said. “Maybe Liz Cheney and Adam Kinzinger can save it. I hope they do. And if not, I hope we get another political party that’s worthy of America.”

Raskin said he believes Cheney has “really decent values” in spite of their “major policy differences.”

“I told her, I can’t wait to start disagreeing with her in public,” Raskin said, adding that he looks forward to opportunities to discuss and debate the policy issues on which they differ while acknowledging what they have in common “in terms of our constitutional patriotism and commitment to democracy.”

Raskin closed the evening by paraphrasing his late father, Marcus Raskin: “Democracy needs a ground to stand on (and) that ground is the truth. … If you don't have truth, then you can't have democracy.”

Raskin sounded optimistic about the current period of political strife, insisting the country will “get through it.”

“When I was growing up, my dad used to say to us, ‘When everything looks hopeless, you are the hope,’” Raskin said. “I'm just seeing so many people around the country standing up now, and not being afraid of what we're facing. … We’re going to move forward, and we're going to make a future that is befitting American democracy and humanity and the future that we want for our children.”

Missed a session? Stream more than 20 from the comfort of your couch

With more than 20 thought-provoking Cap Times Idea Fest sessions, there are a lot of topics to catch up on. Watch, or read coverage by Cap Tim…

'Unusual' surplus could mean a bonus for Madison city staff

Cap Times Idea Fest: Why the Wisconsin midterms are pivotal for democracy