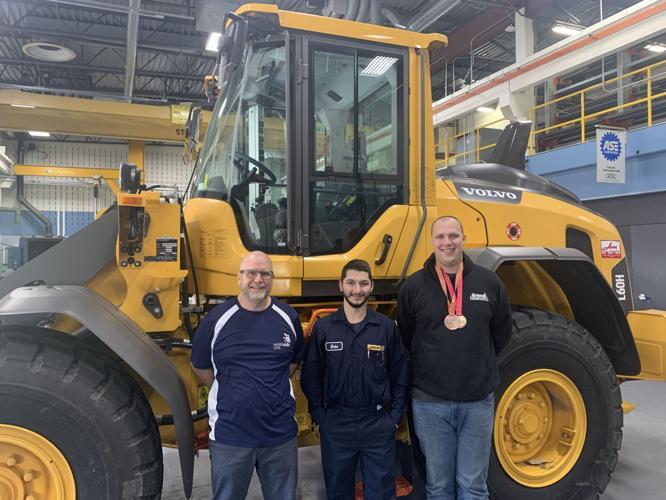 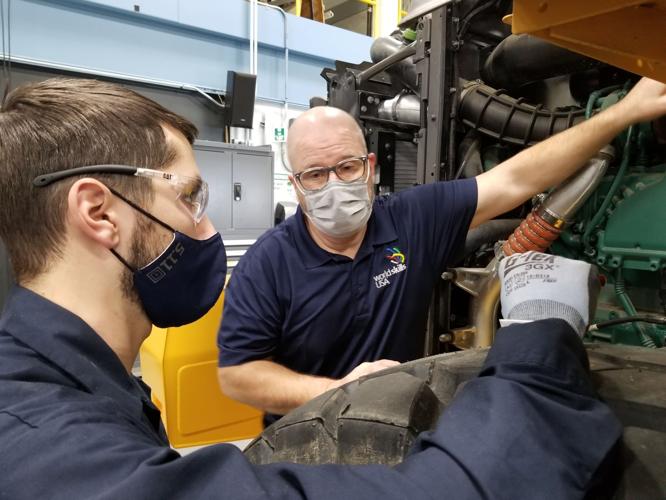 As part of the competition, Krebs will do heavy equipment repairs in just three hours.

Though Gabe Krebs spends his days working as a technician at a Caterpillar dealership, the job is more than just fixing heavy machinery — it also serves as his training for an upcoming global competition.

Krebs, a 21-year-old graduate of Dakota County Technical College in Minnesota, has less than a year left before he heads to Shanghai for the “Olympics of trade schools,” also known as the WorldSkills competition.

He is preparing for the contest alongside Madison College diesel technology instructor Tom Wozniak, who trains competitors representing the USA team in the heavy vehicle maintenance category. As technical careers reach higher levels of demand than ever, Wozniak is out to prove that the U.S. is the best in trade skills.

“We are putting the best of the nation on the world stage,” he said.

To qualify for WorldSkills, participants must excel at competitions through SkillsUSA, a career and technical student organization dedicated to closing the nation’s skills gap. After winning at the state level and receiving a silver medal at a national SkillsUSA competition, Krebs was selected by Wozniak to compete on the global stage.

Initially postponed in 2021, the Shanghai competition will take place this October. The contest evaluates 50 trade skills, including hospitality, cosmetology, car repair and cooking, attracting thousands of people from more than 76 countries.

“This is all about the real world,” Krebs said. “These are the jobs that people need to have in order for the world economy to keep going and to excel.”

As a way to give Krebs a leg-up in the competition, Wozniak recently secured him a job at a Minnesota Caterpillar dealership that specializes in heavy machinery. During the competition, those in the heavy vehicle technology category will go through several rounds of repairing equipment in just three hours.

With three heavy vehicle classrooms, three labs and 50 pieces of equipment to work on, Madison College’s facility is well-equipped to prepare Krebs for WorldSkills. Wozniak said the school’s diesel technology and heavy equipment classes have some of the largest spaces and are among the most well-funded programs on campus.

He sees WorldSkills as a way to get people interested in technical careers, especially as COVID-19 has brought enrollment declines to two-year colleges. According to the National Student Clearinghouse, the number of students seeking associate degrees fell 14.1% since 2019 —  the hardest hit sector in higher education.

At Madison College, Wozniak said his program has 30 students enrolled, though it typically graduated as many as 80 before the pandemic. Considering the field is hands-on, with students learning to repair equipment from engines to construction vehicles, he said online formats made it more difficult for them to learn.

Krebs hopes others will start paying attention to WorldSkills and realize the value of technical careers because “it’s definitely lacking from what it could and should be,” he said. While in high demand and offering sizable salaries, people tend to underestimate the importance of diesel technician careers.

“Everything that you do in your life has been touched by something in this diesel industry, from the clothes you buy and the food you eat to the house you live in and the roads you drive on,” Wozniak said. “All of that wouldn't have been able to happen without this industry.”

Compared to previous competitions, the WorldSkills USA team has a smaller delegation this year, with just three competitors.

“We don’t have the corporate sponsorships and donations that we wish we would have,” Wozniak said. “We just don’t have the funds available, and I think COVID played a huge role with that.”

The USA team is also “funded solely by donations from corporate America,” Wozniak said. “You know how good their finances are depending on whether or not we can take a team.” In a majority of other countries, he said, their government pays for the costs to train and send delegates, “just like they do for the Olympics.”

But the U.S. doesn’t put as much emphasis on the competition, and Wozniak would like to see more support from the country. “We keep telling ourselves and saying that we're the greatest country in the world,” he added. “Well, let's put our money where our mouth is. Let's go out there and really show how good America is.”

In doing so, Wozniak said the U.S. will be more prepared as the skills gap grows wider. “When you take a look at all the technical industries, there are many people retiring,” he said. “We don't see young people coming into these industries anymore, yet you can make a very good living. Why aren't we getting people excited about this?”

Using Olympic sports as an example, Krebs said the U.S. should put as much effort into supporting skills competitions as they do entertainment.

“We should put not only sports teams head-to-head for each country,” he said, “but technicians, nurses, cosmetologists and chefs as well — all the people that are part of the real world and have day-to-day jobs to see who’s the best in the world.”