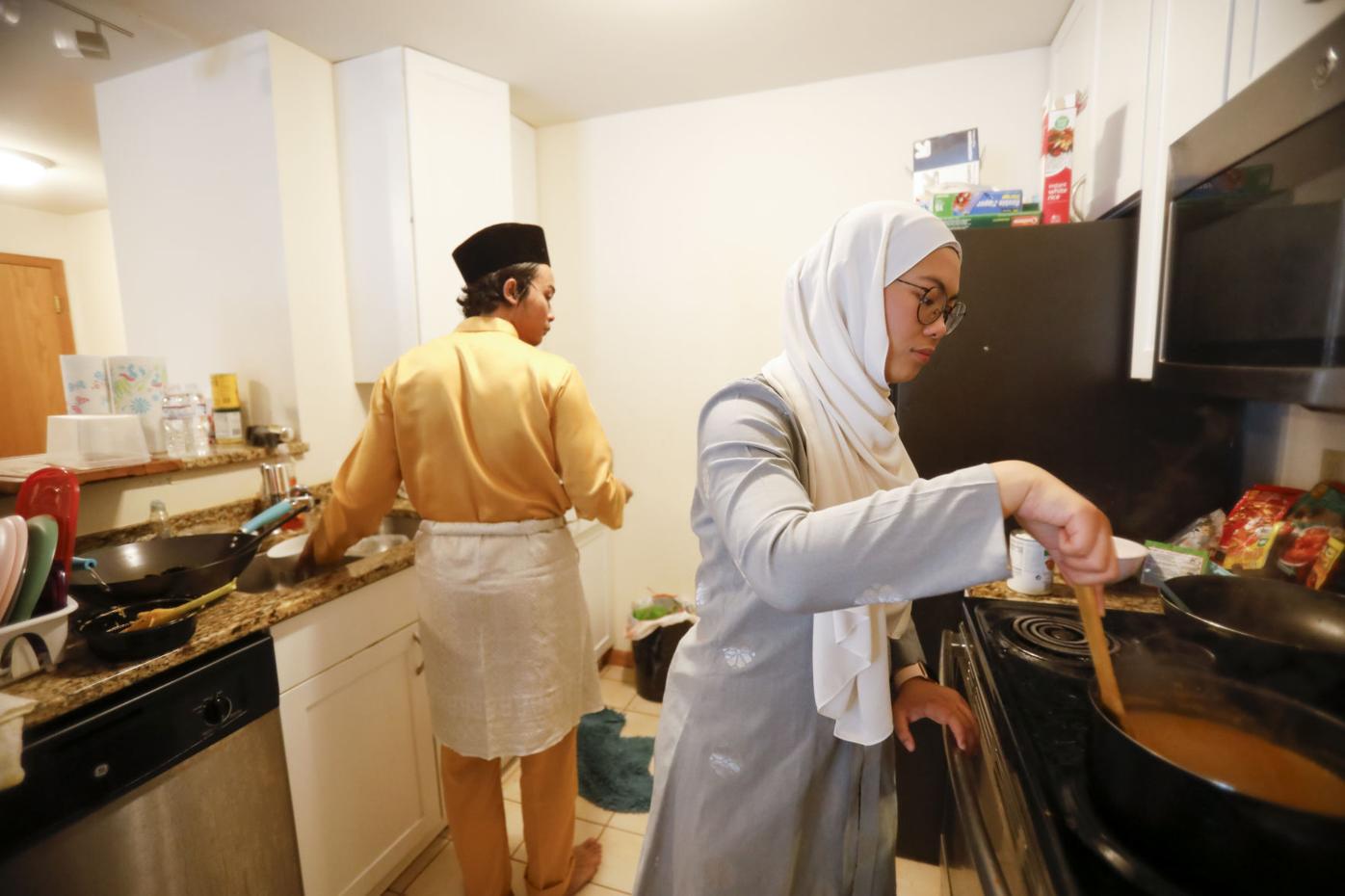 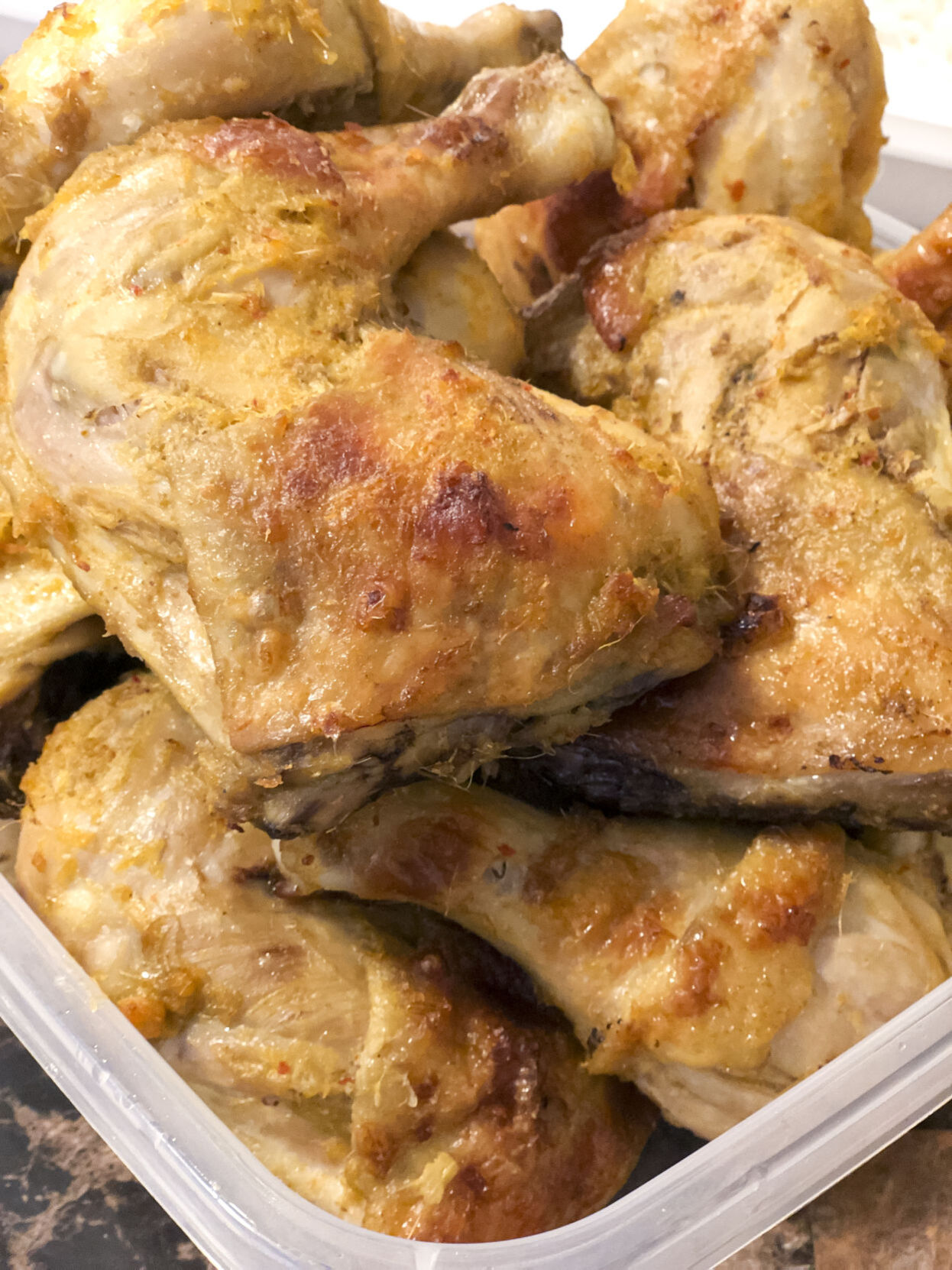 Ayam percik, or aromatic chicken, is a Malaysian halal dish. The meat comes from Istanbul Market on Gammon Road in Madison.

Ayam percik, or aromatic chicken, is a Malaysian halal dish. The meat comes from Istanbul Market on Gammon Road in Madison.

In a small apartment kitchen, University of Wisconsin-Madison sophomore Nur Liyana and freshman Nazrie, who asked to be identified using only their first names, grill several pounds of aromatic chicken, often setting off the smoke detector.

With many people away from campus during winter break, Nazrie and Nur Liyana, both of whom are from Malaysia and study electrical engineering, have curbed their boredom in perfecting complex home-cooked dishes for fellow Malaysian students.

The two call their operation the Gerry Court “warung,” named after the street they both live on in Madison and the roadside food stalls that can be found nearly everywhere in Malaysia. From tomato rice to coconut rice, Nazrie and Nur Liyana have served up around 60 orders of food for those in the UW-Madison Malaysian community, providing them with tastes that remind them of their home overseas.

“We realized that a lot of people either don’t have the time to cook or don’t know how to cook these dishes themselves,” Nur Liyana said. “We saw an opportunity to bring this food back to them, and once we started taking orders, we realized this is actually something people have been wanting.”

The students first met upon moving into the same apartment building this fall, where they bonded over their love for cooking.

While growing up in a village that was “all about local Malay cuisine,” Nazrie learned how to cook from his mom. At 17, Nur Liyana, who grew up in an urban area in Malaysia, started cooking Western foods for her family as a hobby.

After arriving to Madison, she would miss the foods from home, cooking many Malaysian dishes from scratch for the first time alongside Nazrie. The two eventually collaborated on recipes, alternating responsibilities as chefs and cooking dinners for their friends each evening.

After seeing the success of other Asian student associations selling traditional ethnic food on campus, Nur Liyana and Nazrie decided to start their own venture over winter break.

They said the proceeds go toward purchasing the ingredients, and they aren’t in it for the profit. Instead, they cook as a creative outlet — for the love of food, to give themselves purpose, and perhaps just as important, to de-stress from their engineering studies.

“We can stand for hours if we want to cook,” Nazrie said with a laugh, “but we cannot stand studying for hours.”

The two solicit orders exclusively on WhatsApp, a popular messaging platform used around the world. According to a 2020 report from the Global Web Index, Malaysia makes up the fifth highest percentage of WhatsApp users, with 92% of the country using the app.

Like many warungs in Malaysia, the meals serve as a way to unite people, Nazrie said. Since opening up for orders in December, the students have secured several repeat customers and even forged new friendships along the way.

They attribute their success in part to the scarcity of authentic Malaysian food in Madison and support from their peers. On campus, Malaysians are the fifth largest ethnic group among international students, with 136 enrolled this fall.

For those that live far away from home, Nur Liyana said a home-cooked meal allows them to reconnect with their roots. “Some of us really miss Malaysian food,” Nazrie added. “We want to serve them to cure their homesickness.”

Another key to their popularity is the meat itself. Following Islamic dietary laws, the meat is prepared halal, which isn’t sold at most major groceries in Madison. This especially caters to Malaysians, they said, considering many are Muslim.

To find the produce, meats, spices and herbs to make their dishes, the two frequent Asian Midway Foods, a grocery store on South Park Street, and Istanbul Market on South Gammon Road. Both sell a majority of the Malaysian ingredients they would traditionally use at home, like coconut milk, lemongrass and ginger, but the students also said they often employ substitutes.

When making the popular Malaysian chili sauce sambal, for example, Nazrie said he experimented with three different types of chilies, concocting “a mild version that people can enjoy.”

Finding the correct ratio of ingredients is crucial, he said, recalling a quote from his mom: “Everyone can know the recipe, but not everyone has the skills to cook.”

“It’s not like baking, where you have precise calculations. It’s more like intuition,” he said, reciting the phrase “agak agak” in Malay, which means to get a rough estimate.

To prepare their orders, the two spend the whole day cooking in a tight apartment kitchen, using their combined stock of cookware and three out of four stove-burners.

Though the students plan to close their warung once school returns, they hope to offer occasional pop-ups throughout the next semester and to eventually help cater events for the Malaysian Student Association.

For now, Nur Liyana said the two are busy “sharing the food that we cook with people who we share the same home with.”

“By doing this, I know that people who miss Malaysian food can eat, and they come to us with a big smile,” Nazrie said. “We are so happy that we can serve people with our nation’s delicious food.”