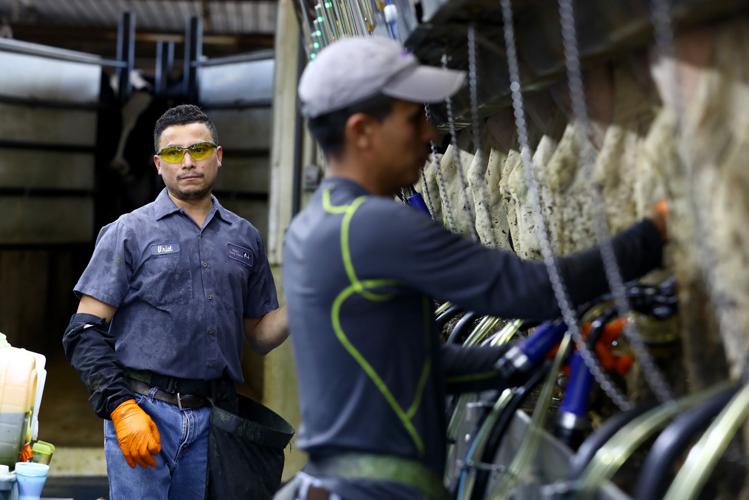 In this 2017 photo, Uriel Lopez, left, works at Ripp's Dairy Valley farm in Dane, where he had worked for 10 years. Here he is seen in the milking parlor with co-worker Eddy Aquilera, who had worked there for four years. Eleven of the 12 non-family members who worked at Ripp's dairy at the time were Hispanic immigrants. 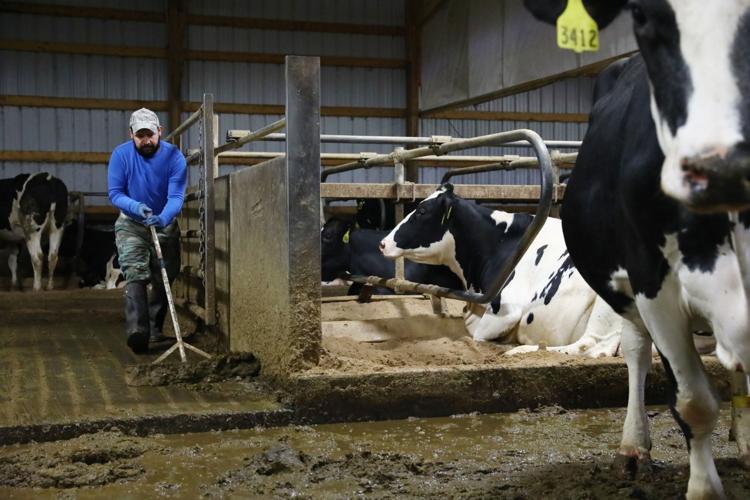 Miguel Hernandez cleans a barn on his last day of work on a Pepin County dairy farm in this June 2017 file photo. He was leaving for Mexico with four other dairy workers the next day due to concerns about changes in U.S. immigration policy. 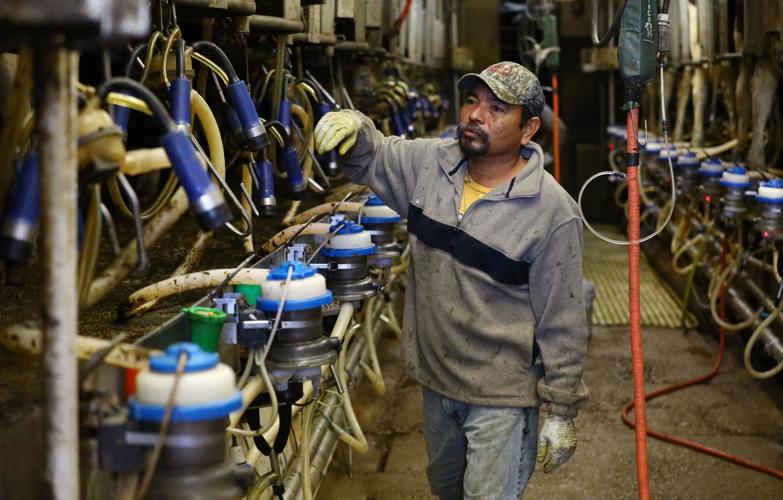 Jorge is from Mexico; he asked his last name not be used. He works in the milking parlor of a dairy farm in northern Buffalo County in 2017. Jorge is among an estimated 51 percent of all dairy workers nationwide who are immigrants.

To save the struggling dairy industry, Congress must change immigration policies, a group of farmers from across the region said Thursday at the World Dairy Expo in Madison.

The annual event, expected to draw about 60,000 people and more than 3,000 cows this year, features an array of cow shows, vendors and workshops. But the tone was far more serious in the hotel meeting room where representatives from the dairy industries of Wisconsin, Minnesota and Indiana gathered for a press conference, calling on legislators from their home states to pass the Farm Workforce Modernization Act.

The bill, which passed the House last year year, would change visa requirements that have for decades barred dairy farms from qualifying to host guest workers.

Immigrants make up about 51% of the dairy workforce nationwide, according to a 2014 study by Texas A&M University. But the existing agricultural guest worker visa program, called H-2A, is designed for seasonal industries like crop farming, where foreign workers come to the U.S. to work for part of the year for their host employer and then return to their home country in the off-season.

That’s not how the dairy industry works, said Brody Stapel, a dairy farmer and board president of Green Bay-based Edge Dairy Farmer Cooperative.

“Dairy is a unique industry with a different set of challenges than any other sector of the ag economy. Cows must be milked at least twice a day, every day, and our raw product is extremely perishable. So a steady workforce is all the more important,” Stapel said.

Although the industry has traditionally offered a living wage, he said. “it’s nearly impossible to fill all available positions with American citizens … Farmers have tried everything.”

Stapel cited a recent study by Forward Analytics, the research division of the Wisconsin Counties Association, which projected that the number of potential workers aged 25 to 64 in Wisconsin will fall by about 130,000 over the next seven years if the state doesn’t find new ways to attract workers from other states or countries.

“The severity of the issue cannot be overstated,” Stapel said.

The Farm Workforce Modernization Act would, among other things, eliminate the requirement that the work be temporary or seasonal, and it would change the way that H-2A workers’ minimum wage is calculated.

According to a study by the libertarian Cato Institute, the bill would reduce labor costs for participating farms by nearly $3 billion in the first two years, thereby reducing food inflation. A separate study by Texas A&M International University found that an increase in the number of migrant and H-2A workers was associated with lower inflation, higher average and minimum wages and lower unemployment.

A 2019 study by researchers at the University of Wisconsin-Madison found that Wisconsin’s dairy industry generates nearly half of the state’s annual industrial agricultural revenue, and around $46 billion in annual economic impact.

‘Another nail in the coffin’

The half dozen speakers at the press conference, representing a variety of agricultural cooperatives and associations, called on the lawmakers to create a year-round guest worker program.

That, they argued, would have sweeping benefits for consumers, including stabilizing rural communities, lowering food prices driven up by inflation, and making the country less dependent on importing food. Next year, for the first time, the country is on track to import more agricultural goods next year than it exports, according to the U.S. Department of Agriculture.

“A stable, legal workforce is required to guarantee farmers maintain and increase their ability to produce an abundant, safe and affordable food supply, not only in the U.S. but also the world,” said Walt Moore, president of the American Dairy Coalition.

Without such changes, Wisconsin will keep losing dairy farms, said Randy Koller, a board member of Dairy Farmers of America. Koller, who keeps 40 cows on his 300-acre farm near Durand, said he’s been fortunate to have help from his two children and a neighbor.

“So I personally haven't had those labor issues, but I'm one of the very few. Most everybody else has,” Koller said, recounting the story of a neighbor who recently sold his 110 cows because he needed hip surgery and didn’t have family members or workers who could keep the farm running while recovered.

“This means less dollars in the local economy, while also being another nail in the coffin of the local ag infrastructure landscape,” Koller said.

Still, even farmers from industries that currently qualify for H-2A workers say the existing program isn’t perfect. Ashley Ahl, co-owner of Northern Family Farms, employs just over 100 H-2A guest workers each year, most of them from Mexico, at her family’s wholesale nursery in the central Wisconsin village of Merrillan.

“This program is so good for ag but it's too limited,” she told the room full of dairy farmers. “We need a comprehensive bill that streamlines the visa process, that extends the length of stay, expands access to farming operations … that require a year round workforce, and ensures that workers are clearing the border and the visa process in a timely manner.” With 70% of her farm’s revenue generated in a 12-week period, she said, if workers are delayed by even a week due to visa processing delays that can throw off the season.

“We also need to stabilize our current ag workforce by providing a pathway for these workers to earn legal status,” Ahl said, a reference to calls to not only expand the guest worker program but allow some immigrants to become legal permanent residents or U.S. citizens.

Cap Times Idea Fest: How immigration could save the dairy industry

The fate of rural Wisconsin and its dairy industry depend on the fate of immigrant workers, according to speakers in a Monday Cap Times Idea Fest panel.

Cap Times Idea Fest: How immigration could save the dairy industry

The fate of rural Wisconsin and its dairy industry depend on the fate of immigrant workers, according to speakers in a Monday Cap Times Idea Fest panel.

Madison's airport is the priciest of nation's 100 busiest airports