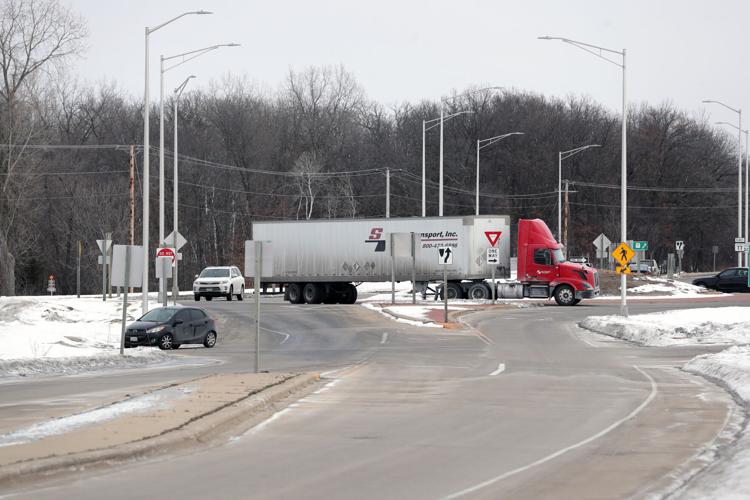 Vehicles navigate the roundabout at the intersection of Highway TT and Highway N near the proposed location for an Amazon warehouse in Cottage Grove. 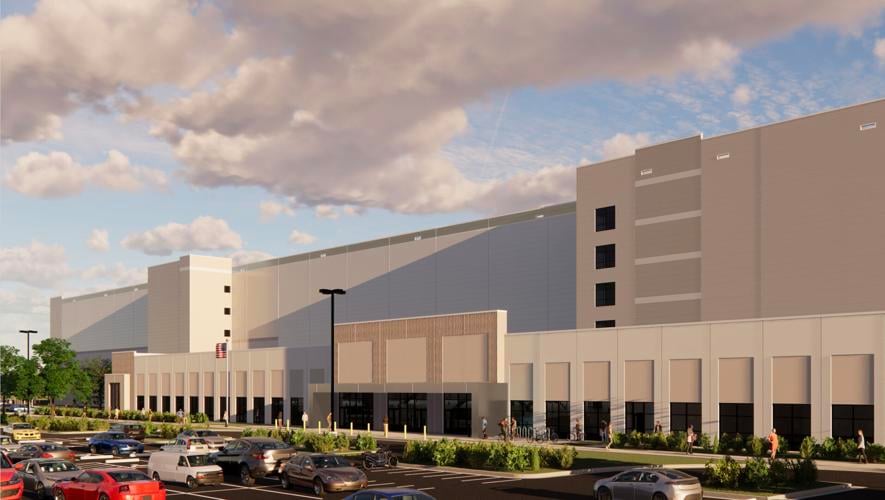 This rendering shows part of what would be a five-story, 3.4 million-square-foot Amazon distribution center and warehouse at the intersection of Highway TT and Highway N in the village of Cottage Grove.

Vehicles navigate the roundabout at the intersection of Highway TT and Highway N near the proposed location for an Amazon warehouse in Cottage Grove.

This rendering shows part of what would be a five-story, 3.4 million-square-foot Amazon distribution center and warehouse at the intersection of Highway TT and Highway N in the village of Cottage Grove.

Amazon’s proposal to bring a major warehouse and distribution center to Cottage Grove is headed for the last step in the approval process after receiving unanimous support Wednesday night from the village’s Plan Commission.

In recent weeks, the online retailer’s plan to build a $200-million, 3.4-million-square-foot facility on a stretch of agricultural land has sparked excitement from village officials and economic development proponents, who say the facility will bring up to 1,500 jobs and millions in tax revenue, and concern from some neighbors, who fear the facility will cause flooding, pollution and traffic problems.

At the Wednesday meeting, 20 residents, most of them from Cottage Grove and neighboring Sun Prairie, spoke in opposition to the proposal. The site in question, at the northwest corner of county highways TT and N, was annexed from Sun Prairie to Cottage Grove about a decade ago and slated for development as part of a tax incremental finance district run by the village.

“I've been living here for 25 years and worked hard to keep my property value up to market value,” said Joyce Banach, whose Sun Prairie home sits just west of the site. “Now, with a swipe of a pen, I feel like my property value is going to just take a nosedive with all the light pollution and the traffic.”

Like many residents who spoke at the meeting, Banach expressed frustration that she learned about the plan when it seemed to already be too late to make significant changes.

The project was first reported in the the Monona/Cottage Grove Herald-Independent two weeks ago, and many said they learned about it in the news before the village or developers informed them. Some criticized the fact that the project was initially referred to only by a code name, Project Silver Eagle, hiding Amazon’s name from the public. It’s a controversial tactic the company often uses when proposing projects in new communities.

“We were kind of just a footnote: ‘Oh, by the way, let's notify the neighbors that we're going to be building this,’” Banach said. “I feel like you guys are listening to us, but I really don't think you're taking our concerns seriously.”

Village administrator Matt Giese said that the village followed standard procedures for notifying residents, but the commission plans to reassess those procedures at its next meeting.

Several residents called on the commission to delay its vote by a month or longer, and one resident asked if the fact that Amazon has already purchased 130 of the 145 acres proposed for the facility means the project is already “a done deal.”

“It’s still in the process,” village president John Williams said. “This is part of the process.”

Other residents expressed skepticism about claims made by village officials and Amazon’s developer, Trammell Crow Company, one of the country’s largest developers. Sun Prairie resident Jeff Okazaki wondered whether the traffic analysis conducted by the developer was accurate, and whether the facility would grow over time to produce more traffic.

Unlike “last mile” delivery facilities like the one that opened in 2020 on Madison’s Milwaukee Street, this facility won’t host vans that come and go from neighborhoods. The analysis found that the Cottage Grove facility would generate 3,000 to 3,500 vehicle trips per day.

But Okazaki pointed to the gridlock generated by an Amazon fulfillment center in Robbinsville, New Jersey, where in 2015 the mayor threatened to sue the company because the site generated more than three times as much daily traffic as originally projected.

Okazaki cautioned the village not to trust Trammell Crow’s assessments. “The truth is, they're not being paid to be a good partner to the village. They're being paid a lot of money to be a better partner for Amazon.”

Banks questioned whether the company would be able to fill the 1,500 full-time jobs, most of them hourly “tier one associate” positions, it plans to create. Amazon has notoriously high turnover and injury rates, and the Madison area has the lowest unemployment rate in a state that just broke its own record low.

“Where are they going to get 1,500 people to work there when we can't get people to work in our local area’s industries right now?” Bank said. “Amazon does not need to be here, and there is no benefit to Cottage Grove with them being here.”

Of the 22 members of the public who spoke on the proposal, just two expressed support. One of them was Jason Fields, who advocates for economic development as president and CEO of the Madison Region Economic Partnership.

Fields described an analysis conducted by his office, which used an economic modeling software called Emsi to estimate the indirect benefits that could come from the project. According to the analysis, adding 1,500 warehouse or manufacturing jobs to the area could create about 1,650 jobs and about $77 million in earnings.

“As with all projections, the estimates are based on historical data and patterns. There are no guarantees,” Fields said.

Cottage Grove village administrator Matt Giese, meanwhile, made a case for the direct benefits of the project. For the years until the tax incremental finance district closes — no later than 2038 — the village would get 100% of the new tax revenue from the project, estimated at $4.6 million each year. “To put that number into perspective, the entire village’s tax levy is $4.7 million,” he said.

After that, the village will split the tax revenue with Madison College and the Sun Prairie Area School District. He estimates each entity will get around $1.4 million each year, or about half a million dollars less than the village’s police department budget.

“If approved, Amazon would far and away be the biggest village property taxpayer,” Giese said.

Trammell Crow has previously held neighborhood listening sessions and commissioned lengthy studies to address concerns from residents or officials, including a 223-page stormwater management plan. At the meeting, developers and city staff responded to some of the concerns raised during the public comment period.

But members of the commission discussed only one of those concerns: whether other parcels of the 300-acre tax incremental finance district (TID #10) – of which the proposed Amazon site would take up about half — would have road or driveway access. Such access would be key to developing those parcels in the future, and city staff say they’ve previously considered the options.

After discussion, the commission unanimously recommended the proposal for approval with a stipulation that city staff create a non-binding plan for the layout of future driveway or road access for the other parcels.

The proposal now heads to the Cottage Grove village board, which is expected to vote on it on Monday.

Amazon is proposing a 3.4-million-square-foot warehouse and distribution center for the village. The proposal has local officials excited and some residents worried.

Amazon is proposing a 3.4-million-square-foot warehouse and distribution center for the village. The proposal has local officials excited and some residents worried.