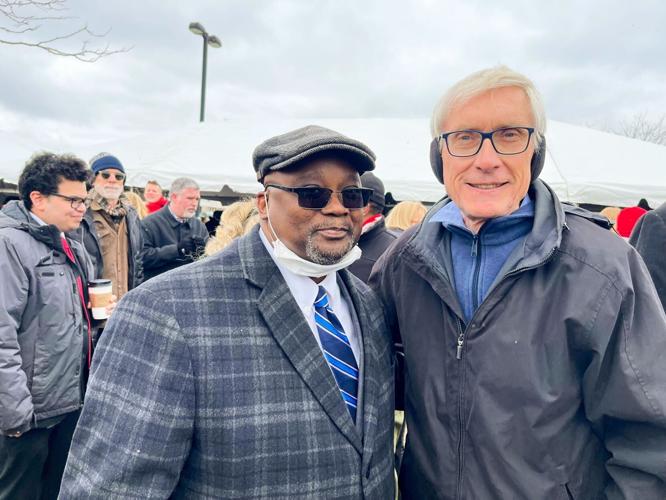 “It’s a big day. We’ve waited a long time and we’re excited to put a shovel in the ground today,” said Urban League CEO Ruben Anthony, left, pictured with Gov. Tony Evers, at the groundbreaking of the Black Business Hub in April. “This place is going to be here and it will be a gift that will keep on giving for decades to come.” 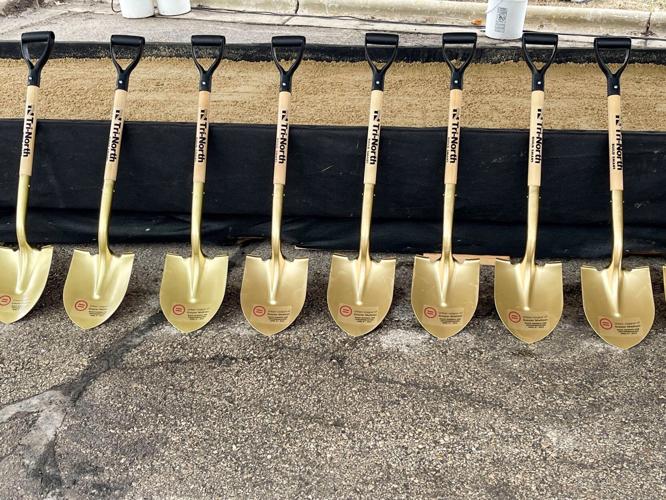 Shovels await the groundbreaking of the Black Business Hub on Friday. 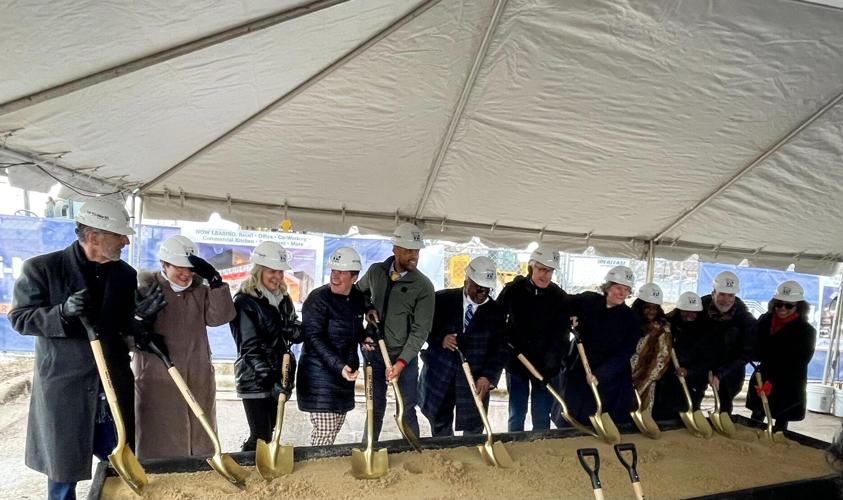 The Urban League of Greater Madison broke ground Friday on what is expected to be a transformative Black Business Hub on the south side of Madison. Gov. Tony Evers, Mayor Satya Rhodes-Conway, state Rep. Shelia Stubbs, Dane County Executive Joe Parisi and hundreds of supporters braved the cold and snow on the April afternoon to celebrate the achievement.

The Black Business Hub will be an 81,000 square foot, four-story building located at the Village on Park, at the corner of South Park Street and Hughes Place. It will include offices, storefronts, a co-working space, space for pop-up vendors and a shared commercial kitchen.

Most of all, it will be a space dedicated to the nurturing and mentoring of Black businesses of all sizes. This will include training, educational support, loans, grants, business coaching and mentoring and networking opportunities.

“It’s so much more than a building,” said District 14 Ald. Sheri Carter. “It’s going to bridge the gap that financial institutions have never addressed for Black and Brown people to succeed and to make dreams become a reality for future entrepreneurs.”

The Hub has developed quickly since it was first announced as a concept in 2020. The project is supported by the city of Madison, Dane County and the governor’s office as well as donations from the Pleasant Rowland Foundation, CUNA Mutual, Exact Sciences, American Family Insurance, the Schlecht Family Foundation and the Sylvia T. O’Neill Together We Build Wealth Fund.

Before the ceremony, Urban League CEO Ruben Anthony announced that the Hub has already raised $17.5 million toward its goal of $25.5 million and is on track to open in the spring of 2023.

That number ticked up as soon as the groundbreaking event began. During the ceremony, U.S. Sen. Tammy Baldwin announced by video she has secured $1 million in a federal appropriation for the project, bringing its funding total to $18.5 million in only a year-and -a-half of fundraising.

“It’s a big day. We’ve waited a long time and we’re excited to put a shovel in the ground today,” Anthony said. “This place is going to be here and it will be a gift that will keep on giving for decades to come.”

Anthony said the Hub represents hope for the future of south Madison and it reflects the type of investment needed in order to level the playing field for prospective Black entrepreneurs, who have been traditionally under-resourced.

Evers remarked that the success of the Hub and the speed with which it has developed is a testament to the community.

“It’s a great day for Wisconsin and a great day for Madison,” Evers said. “This is a community project that is going to succeed because it was built by the entire community. When we invest in small businesses, our communities see the direct impact almost immediately.”

The city of Madison has been involved in helping develop the Hub from the beginning, donating the land to the Urban League of Greater Madison that will be used for the Hub.

“We are going to continue to invest about 10 million in this site to improve the Village on Park and provide the infrastructure that this will need to succeed. We are betting on south Madison, black businesses and the Urban League.”

The Wisconsin Economic Development Corporation was already on board as an anchor tenant. On Friday afternoon, Summit Credit Union announced that it would also be a tenant of the Black Business Hub. Summit Credit Union CEO Kim Sponem said the credit union will open a branch inside of the Hub as well as perform financial wellness training on-site.

Exact Sciences will also have space in the Hub which it will use to build more diversity in its talent pool.

For some in attendance, the ceremony brought to mind a similar groundbreaking in June 2018 when Madison College broke ground on its Goodman South Campus building. Madison College constructing a state-of-the-art facility in partnership with local organizations represented a major shift towards the revitalization of south Madison.

In addition to the Hub construction, other organizations aimed at elevating communities of color have major projects in progress. The Center for Black Excellence and Culture, a new space for One City schools, and a new building for Centro Hispano are in various stages of the development process. The city of Madison, as part of the new South Madison Plan, has plans to bring affordable housing and a facelift of the Village on Park mall to the south side as well.

“It’s about looking toward the future. As the great John Lewis said, ‘We must be headlights not taillights,’” Stubbs said. “Today we are planting the seeds of ingenuity for our children and our children’s children. This Hub is not the end of our fight. But it’s the dawning of a new horizon.

“We will see unprecedented growth and unprecedented success for Black businesses and Black families. Every aspect of the Black community will be uplifted by this effort.”

MMSD enrollment projected to drop another 10% over next five years