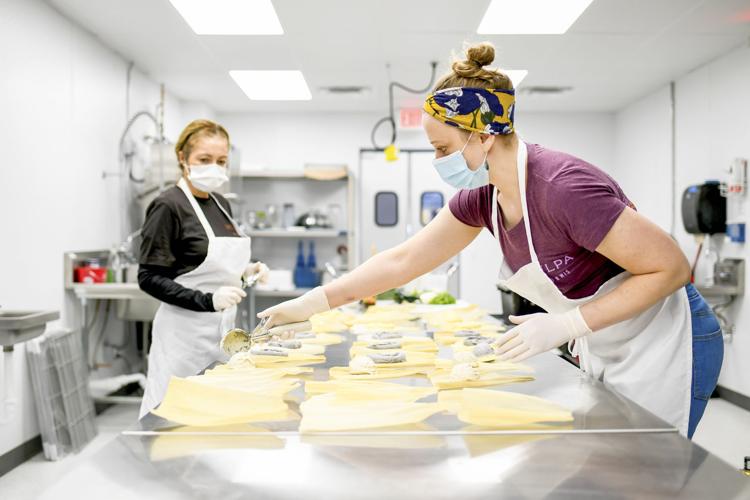 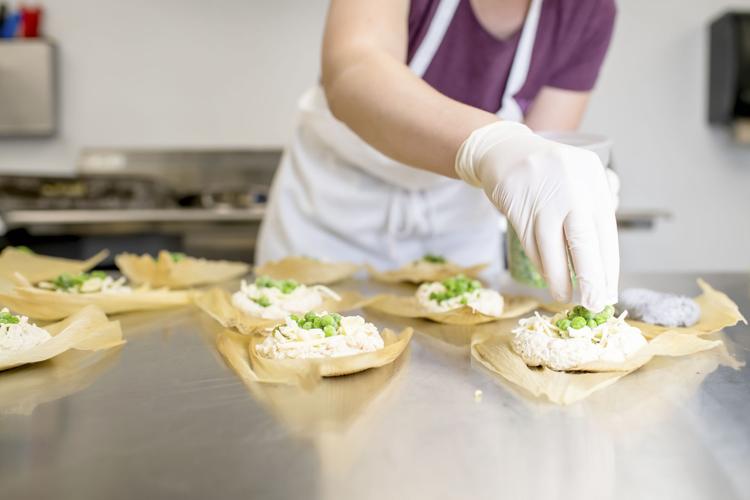 Shannon Berry, co-owner of Milpa, places peas atop tamales with white corn and spicy greens at Pasture and Plenty. 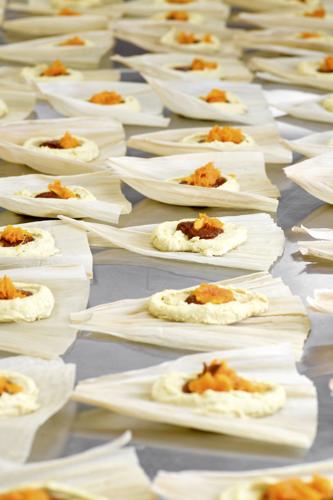 Yellow corn, squash and mole tamales, made by Milpa at the Pasture and Plenty Makeshop. 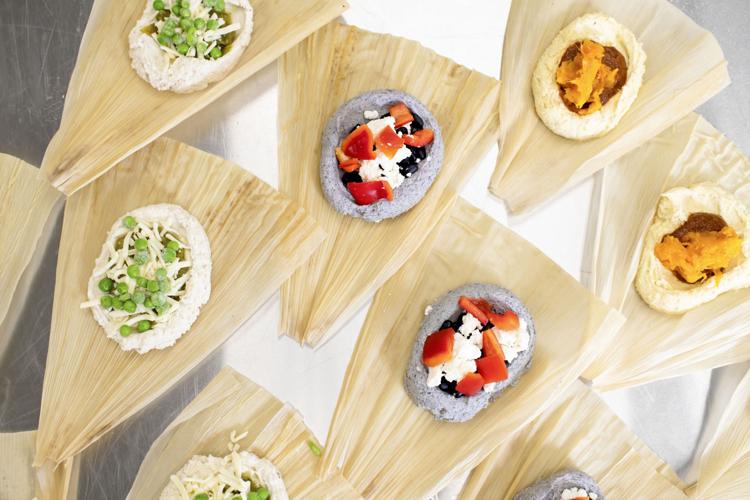 Three flavors of Milpa tamales; white corn and spicy greens, queso fresco, beans and chilies and yellow corn, squash and mole, are assembled at Pasture and Plenty in Madison on Dec. 4, 2021. 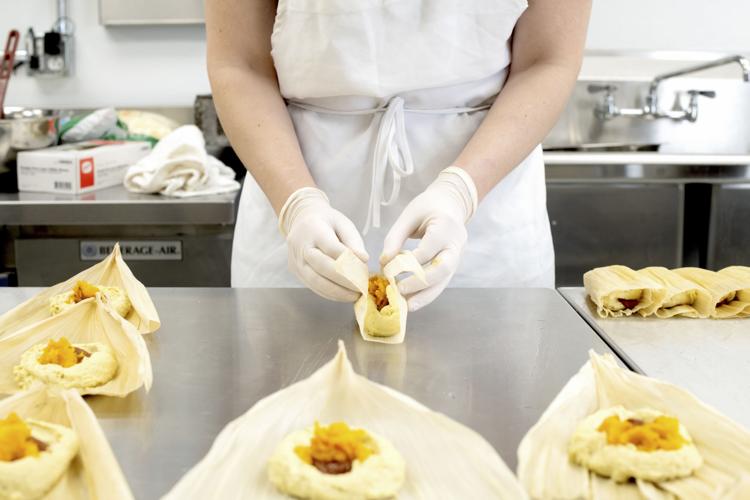 Shannon Berry assembles yellow corn, squash and mole tamales for her business, Milpa. She and her business partner are adding a new line of salsas soon. 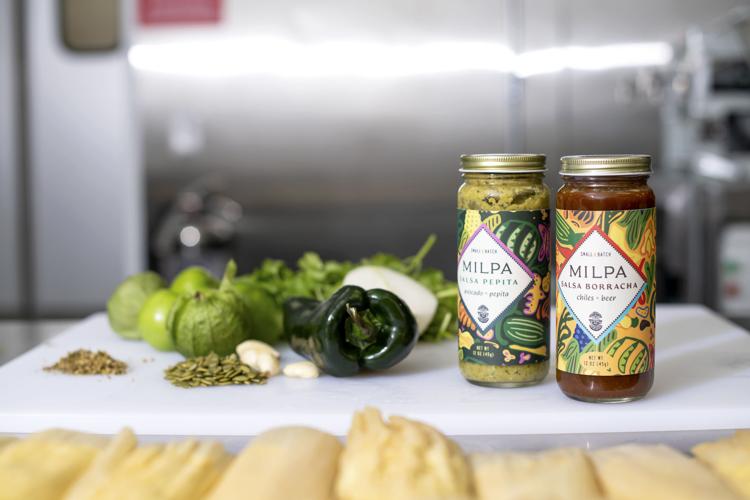 On Dec. 20, Milpa will launch two salsas, salsa pepita and salsa borracha, to be sold at Pasture and Plenty, 2433 University Ave. 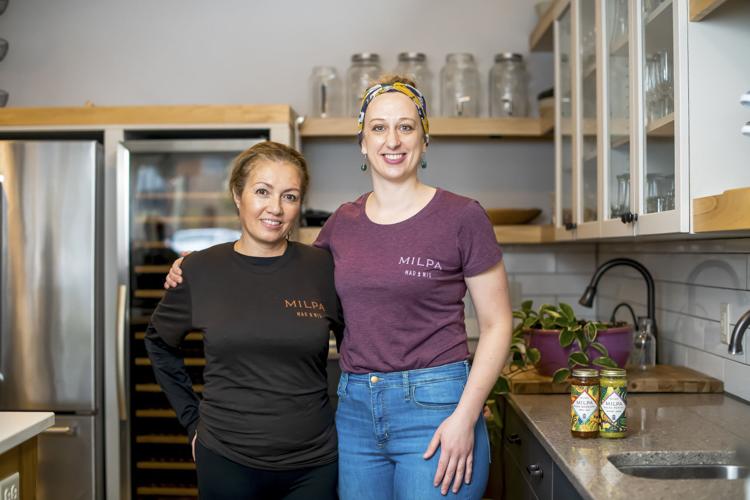 Miroslava Muñoz and Shannon Berry are the co-owners of Milpa.

Shannon Berry, co-owner of Milpa, places peas atop tamales with white corn and spicy greens at Pasture and Plenty.

Someone who walks into Pasture and Plenty’s new Makeshop on a Saturday might not only smell fresh baked goods as they enter. They might also catch a whiff of ground corn and spicy mole.

Each weekend, Milpa owners Shannon Berry and Miroslava (Miros) Muñoz prepare roughly 400 tamales in this near west side food hub, to be placed in the store’s freezer for sale on Monday. As the cook, the smell of fresh masa wrapped in steamed corn husks fills the air of the kitchen.

“I remember smelling it everywhere I went in Guatemala,” said Berry, who lived in the country for about a year before entering culinary school in Portland, Oregon. “It’s an awesome smell.”

Muñoz, originally from Torreón, just north of Mexico City, says the smell takes her right back home. “It reminds me of living in Mexico and making tamales with my kids when they were very young,” Muñoz said. “The flavors, the smells. I miss it all.”

Berry works full time as Pasture and Plenty’s pastry chef and Muñoz works in the kitchen at Nuestro Mundo School. Both women are passionate about bringing Mexican flavors to Madison. That’s why they dedicate off hours and weekends to making batches of tamales.

At Pasture and Plenty, they sell conchas ($4, puffy seashell-shaped sweet breads) and pozole verde soup ($8.50 for small, $17 for large), the latter served with tortilla chips. Milpa’s churros and empanadas — kind of like funnel cake and calzones, respectively — are available to order through its website.

Milpa launched this fall but has been in the works since Berry and Muñoz met at Batch Bakehouse in Madison nine years ago. “The connection was immediate,” Berry said. “And I think the bond is our love for Mexican culture. We love these flavors and I love to learn.”

At Batch, Muñoz learned eagerly under Berry’s guidance. She has now been teaching Berry about technique and proper texture with the Mexican food she knows so well.

“She learns very quickly,” said Muñoz of Berry. Berry added of Muñoz, “I saw so much potential with her at Batch. She’s got a great palate and is a hard worker. Anyone who’s worked with Miros will tell you the same.”

Milpa’s sweets are expansive. The conchas — sweet Mexican bread rolls — come in a variety of flavors from marzipan (almond) to mango. But the business has gained much of its popularity through the tamales. They make 300 to 500 a week, and most sell within five days.

“I’m always starving for their tamales,” said Christy McKenzie, founder and owner of Pasture and Plenty and the P&P Makeshop. “We can’t keep them in the case. They move so fast.”

Milpa’s tamales sell in packs of six for $14.50 and come in four different varieties. These include: red corn and chocolate; yellow corn, butternut squash and “Muñoz mole,” a sauce made with chile, spices and salt; white corn with spicy greens (spinach, green chile and cilantro); and finally, Berry’s favorite, blue corn with queso fresco, black beans and chile.

“Something about the blue corn brings me right back to the mountains in Guatemala,” Berry said.

With their tamales, Berry says Milpa aimed to get the closest they could to the flavor and technique of Mexico, but also introduce an ingredient combination that’s a collaboration between Milpa and local businesses in Madison.

“We want to be as locally forward as possible,” said Berry. “There are limitations, of course. No one’s growing limes here and we will continue to use limes. But, as much as possible, we're going to use local farmers.”

A fusion of flavors

Beginning Dec. 20, Milpa will roll out two new salsas at Pasture and Plenty, salsa pepita and salsa borracha. The salsa pepita is made with pumpkin seeds, serrano and poblano peppers, and cilantro, as well as tomatillos, onions and garlic from Gonzalez. The salsa borracha, meaning “drunken salsa,” includes habañero and jalapeño peppers, as well as a hazy IPA from Working Draft Beer Company called Pulp Culture.

“We wanted to feature a local beer that we loved,” said Berry. “Ryan Browne over there does an awesome job with his beer.”

Muñoz and Berry describe Milpa’s products as “a fusion of flavors” that highlight local businesses while bridging cultural gaps.

“There's a really thriving Mexican food scene in Madison, but it’s divided,” said Berry. “There’s the food scene among the Mexicans who really know where to go and they all know each other. And then you have the small group of really well known restaurants that the rest of us will visit over and over again. There's this weird disconnect and we want to help build a bridge between the two. Just like how Milpa’s food is a product of my and Miros’ relationship.

“We want to make a connection between these two cultures that are so different.”

Berry and Muñoz aim to eventually have a bigger line of salsas. They want to invest in communities by donating a percentage of Milpa’s profits to places like Nuestro Mundo, create seasonal tamale flavors and, perhaps, even open their own small tienda, or shop.

Berry’s not sure if that’s realistic, but “we love people. And this food, from the beginning, has been about connection.”

“I just hope people enjoy the food and that it brings together the people of Madison and the cultures in Madison,” Muñoz added. “We want to start there, and then, hopefully, make even more connections. Now, I’m very happy, very content working with my best friend.”

At Pasture and Plenty, 2433 University Ave.