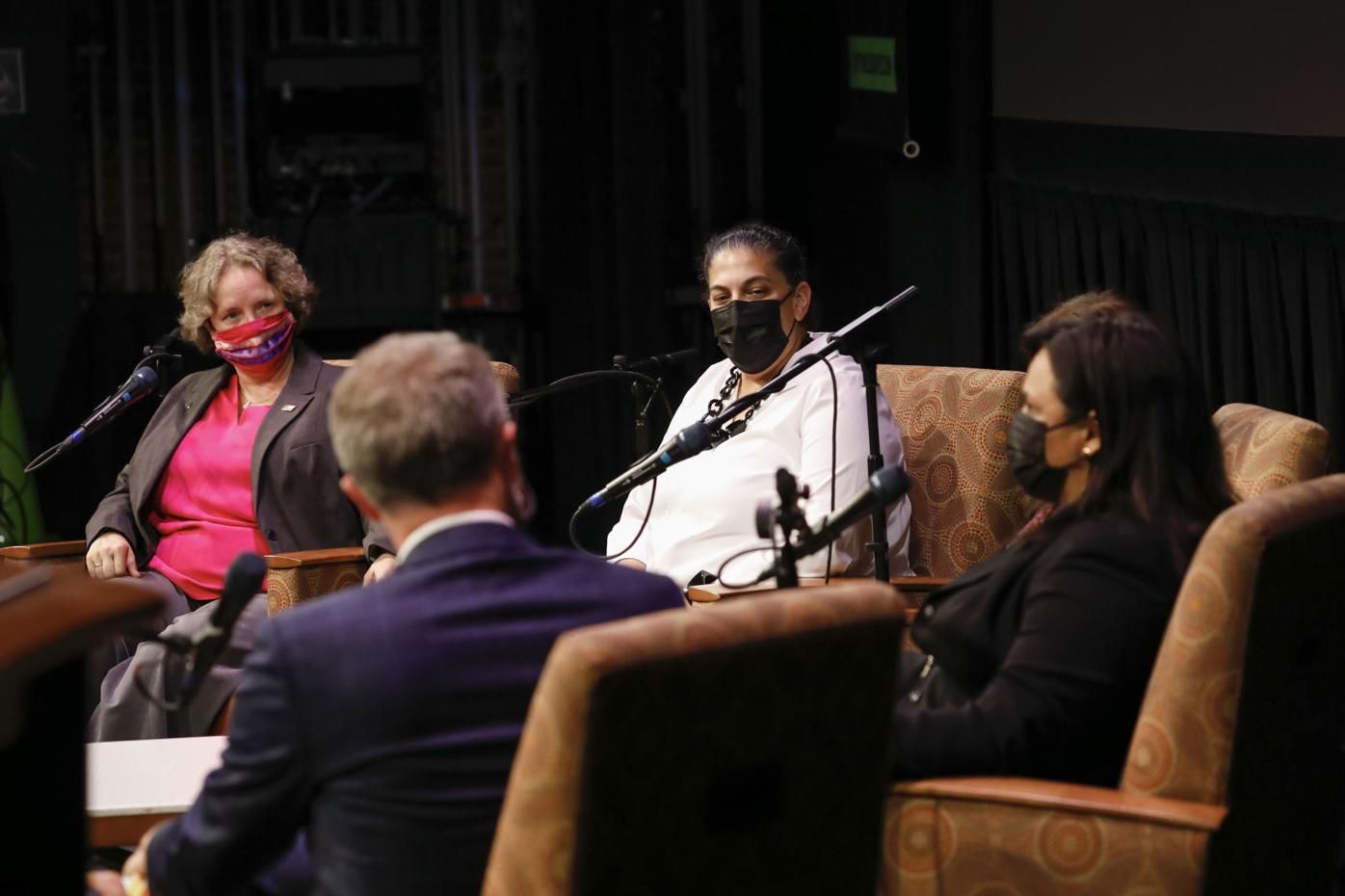 Madison Mayor Satya Rhodes-Conway, senior vice president/chief operating officer of The Edgewater Hotel Amy Supple and president and CEO of the Latino Chamber of Commerce Jessica Cavazos serve as panelists during a Cap Times Idea Fest session on the future of downtown Madison on Sept. 18. 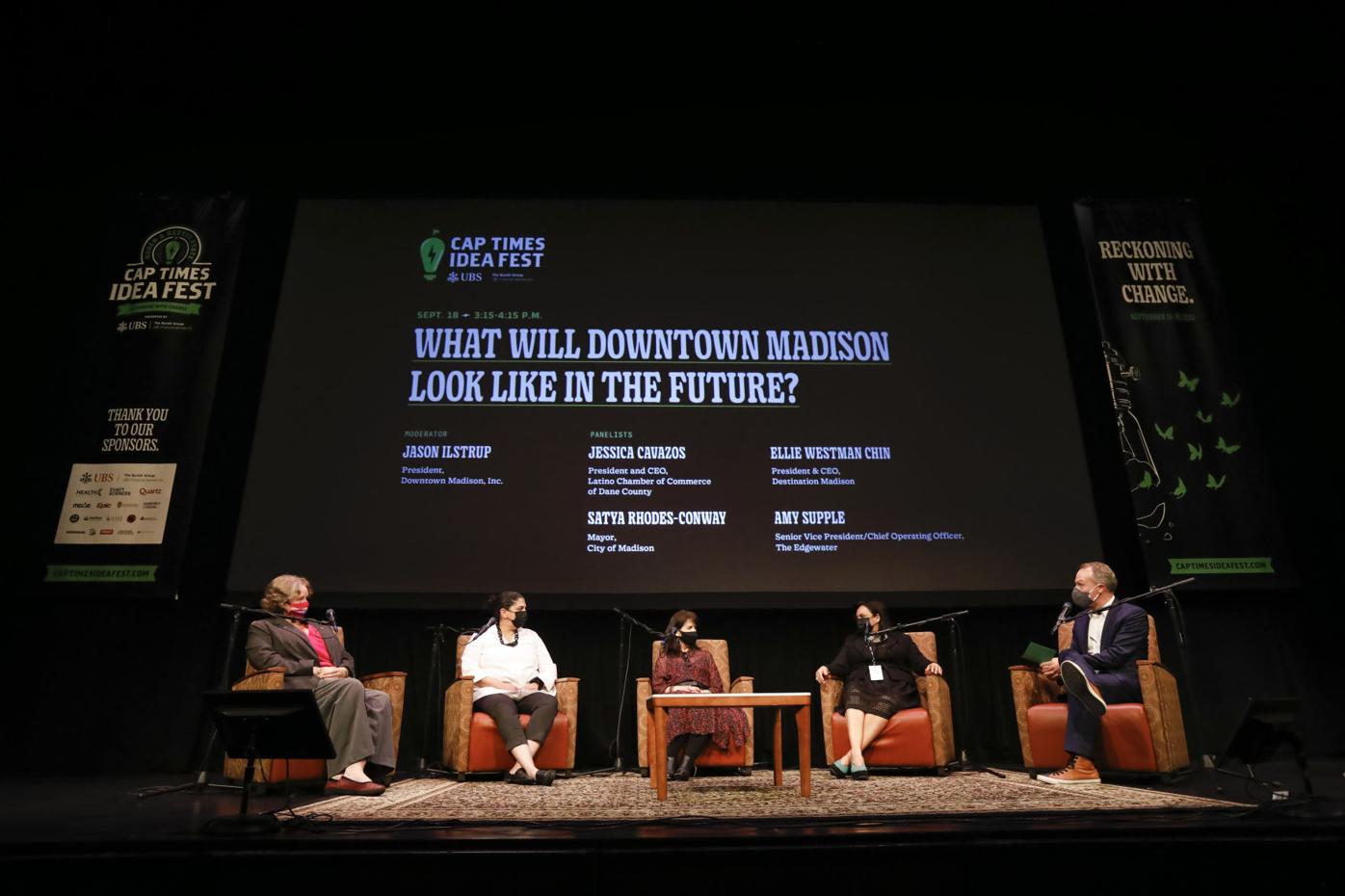 How to attract pandemic-nervous tourists and also bring back traditional Madison mass-gathering events were the major topics of conversation during a Cap Times Idea Fest panel on the future of downtown Madison.

The group was tasked with exploring what downtown Madison will look like in the future. It was a topic largely dominated by the unknown future caused by the COVID-19 pandemic.

“The Farmers' Market and Art Fair on the Square are so important to get back because those bring people from out of town,” Supple said during a discussion about the way downtown has been affected by the pandemic. This year's art far, which is typically in July, was moved to this weekend.

Rhodes-Conway agreed, saying the lack of foot traffic downtown and the reticence of out-of-town people to bring their shows, vending, entertainment or other ventures to Madison, greatly affects the business of downtown restaurants, in particular.

“We don’t have the large events coming back and we’re feeling that,” Rhodes-Conway said. “I think locally we’re seeing people come back downtown for things... that’s the base. But it’s not enough. We still lack people coming in from other places.”

[Cap Times Idea Fest Poll: What will downtown Madison look like in the future?]

Diversity, both in the racial makeup of residents downtown, as well as in the cultural essence of businesses, restaurants and shops was marked as the thing most panelists thought was most important to downtown's future.

Cavazos, as the head of the Latino Chamber of Commerce, has been at the forefront of bringing a diverse set of businesses to Madison as well as leading dialogues about racial equity.

“When we talk about diversity, I think once you start inviting folks and catering to their needs, downtown becomes a lot more fun,” she said.

The Edgewater's Supple pointed out that in addition to bringing more diversity downtown, seizing on the vibrancy that already exists and programming that to fit the needs of more people is vital.

“What really makes a great downtown is the experiences,” Supple said. “To me, when I think about what makes a vibrant downtown, the first word that comes to my mind is ‘programming.’ You want to bring the residents from surrounding communities together downtown. People like the vibrancy of seeing others on bikes, walking in the streets, and the uniqueness of the shops and restaurants.”

Supple also pointed out that before the pandemic, Madison enjoyed $300 million in tourism revenue. That figure is down to $100 million.

Bringing a varied group of people together to rebuild that vibrant tourist economy as well as continuing to develop new ways of growing the downtown experience for people of color are the goals of Mayor Rhodes-Conway moving forward.

“What the pandemic has done is brought problems into focus,” Rhodes-Conway said. “Having that new focus and having the problems articulated makes us better able to solve them. I see a lot more intentionality happening. Downtown was comfortable for some people in the community, but not everyone.”